The Thrill of the ‘Chase

Thoroughbreds race again in their second careers as steeplechasers The strapping bay looks like a top-tier stakes horse, the kind you see in the paddock at Churchill the first Saturday in May. But this horse — African Oil — wanted nothing to do with flat racing, regularly bucking off exercise riders and once erupting from the gate in a violent series of bucks before refusing to run.

But it turns out African Oil can jump. Fast.

Jockey Bernie Dalton and his wife, trainer Kate Dalton, have channeled African Oil’s ample momentum forward and over hurdles, and in 2015, his first year as a steeplechase horse, he had three wins in four starts and was named National Steeplechase Association’s novice hurdle champion with $93,000 earned.

Like African Oil, most every steeplechase horse — simply, one that races over jumps — is a second-career Thoroughbred. Yes, arguably, these horses are still racehorses. But to find success over the two types of obstacles, hurdles and timber, completely different skillsets and training programs come into play than on the flat track. Steeplechasing, and training for the sport, highlights these equine athletes’ versatility.

The American steeplechase scene thrives on the eastern seaboard, between New York and Georgia. This strip of states or commonwealths hosts most of the country’s one-day meets, though the circuit makes a few jogs out to Kentucky and Tennessee.

Joe Clancy, based in Fair Hill, Maryland, knows flat racing and steeplechasing, having grown up with a successful flat and steeplechase trainer as a dad.

“When I was in elementary school, we lived basically within the grounds of Delaware Park,” he says. “We went to the races all day.”

Clancy was more than an observer, however, as he worked in the barns, groomed and did “whatever needed to be done.”

“I rode a handful of flat racers at the steeplechase meets, but not in the jump races,” he says. “Obviously, a flat jockey career went out the window probably at age 12. My brother (Sean) did ride jump races for years; he’s 5’8”. ”

Alas, a career as a jockey wasn’t in Clancy’s cards, but his true calling became evident in his ability to inform others about the game. He’s now a seasoned turf writer, having won an Eclipse Award — this industry’s answer to the Oscars; an editor; publisher; and owner of ST Publishing, which produced Steeplechase Times for 18 years and is the parent company of ThisIsHorseRacing.com and The Saratoga Special.

To those unfamiliar with steeplechasing, Clancy explains the basic mechanics of finding a prospect: “Nobody really buys a 2-year-old or a yearling thinking they’ll be a steeplechaser,” he says. “Most of the steeplechasers are bought privately from flat connections. Most people just scout the (Daily Racing) Form, or they have trainers they’re connected to or horses that they think might suit or are out of options on the flat. That’s probably their best source, really.”

What Makes a Good Prospect?

A steeplechaser runs farther than a horse on the flat. Races over hurdles cover 2 to 3 miles, and timber races span 3 to 4. Whether a horse does hurdles or timber depends on his speed and jumping style; some might start out as hurdle horses and graduate to timber.

Hurdles demand a fast jump over a series of synthetic brush fences 52 inches high (the horse can brush through the top 6 to 8 inches of these “National Fences”), while timber is exactly as it sounds — a taller, more solid fence that requires a scopier jump.

So, what is the “look” these horses have, in addition to their race records, that captures the steeplechase trainer’s eye?

“It’s still a race, so the faster the horse, the better he’s going to be at it,” says Clancy. “Certainly some flat form helps, but as far as type goes, the races are long, so it’s those big, long-strided horses that want to run longer than 6 furlongs that are usually your best steeplechaser.

“If you know the type that run in the mile-and-a-half grass races on the flat, (those) are usually big-type horses anyway,” he continues, noting that you rarely — if ever — consider the really short, explosive, sprinter types. “They’re just not going to go do it.”

Steeplechase trainer Jazz Napravnik, of Monkton, Maryland, also knows a prospect when she sees one, drawing on both race records and form.

“I might be watching some flat racing and see a horse that looks the part,” she says. “Big stride, big shoulder, uphill build, looks athletic. Then I watch him run.”

Napravnik prefers a prospect that stands between 16 and 16.3 hands.

Any bigger and they can have hard time staying sound, she says, because they are carrying more of their own weight and also heavier jockeys than they did in flat racing.

“Look at their form, you know, something that’s got that turn of foot at the end, likes to close, likes to drive,” she adds. “You talk to the exercise rider, and they tell you the horse never gets tired, goes all day, and they can’t pull him up. The horse that might have finished fourth or fifth in the race, but was closing, and the jockey’s all the way to the half-mile pole before he gets the horse pulled up? Those are the kinds I look for.”

Occasionally, trainers come across the odd prospect that has the build for flat racing but not the temperament (think African Oil). These horses are hit or miss, Napravnik says, noting that spotting horses requires an intimate knowledge of both steeplechasing and the horse’s personality.

One of the reasons steeplechase works so well for racehorses is the environment. Like Kate Dalton and Napravnik, most steeplechase trainers are based at country farms as opposed to urban racetracks. This shift from backside to, essentially, backyards comes with an innate opportunity to let down a bit before gearing back up to this second career.

“They get daily turnout, grass, a much more low-key lifestyle,” says Napravnik.

Unsuccessful racehorses that can’t handle the stress at the track can come out to the countryside, take a deep breath, relax and turn around and excel at another type of racing.

And while training at the track is a rotation of gallops and breezes (see Racehorse Life: Watching the Works, page 64), training on the farm consists of cross-country and hill work over a surface that’s kind to horses that got a little sore on the track, as any athlete might.

Then there’s the jumping. Napravnik introduces her horses to jumping … in the woods. “I find logs to be the most natural thing for the horse to jump,” she says, “and when you put them on the trail, and there’s no way around, it’s natural for them to just go forward and over it.”

Once horses understand the point of getting from one side to the other, Napravnik mixes it up, drawing from her roots in eventing. She schools the horses over gymnastics, changing the distances between the jumps to teach them to adjust their strides and figure out where they need to put their feet.

A confident horse over gymnastics can move to jumping hurdle rolls, which are basically foam rolltops. The horses then graduate to small hurdles with just a little brush on the back.

Often when trainers pair the hurdles with the horse’s galloping training, a lightbulb illuminates, and a hurdle horse emerges.

As in other second-career disciplines, every horse finds its niche. “If I get a horse off the racetrack, I usually have in my head to make them a hurdle horse first,” says Napravnik. “There are more opportunities for hurdle racing (than timber); the purses are bigger. The racing is shorter and faster.”

Horses too slow for hurdles can often be good timber horses because the distances allow them to maintain a slower pace. A horse that’s “too good” of a jumper — one slow and careful over hurdles — might also make a better timber horse.

“For a hurdle horse you really want them to jump through the top of the fence, fast,” says Napravnik.

The transition from flat racing to steeplechasing can take from weeks to an entire season, depending on the horse. All For Us, a 5-year-old A.P. Indy grandson, won a maiden hurdle this spring at the Iroquois Steeplechase, in Nashville, a mere 10 weeks after his last flat race.

Even within the sport, however, transitions happen, with successful hurdle horses converting to timber when they get older, slower and perhaps even a bit wiser. Hurdle or timber horse, it’s not unusual to see a steeplechase horse at a hunter trial, on a trail ride or in a horse show, both for cross-training and for keeping them fresh and interested.

Many timber horses are foxhunting regulars. “A day’s foxhunting is the greatest training for a 3-mile race you can have,” Clancy says. “Most of the trainers say the horse never knows that he did a whole bunch of work.”

Foxhunting is also good for teaching timber horses to school in company.

“It teaches them be able to gallop and chill out and stop and stay behind and relax and rate,” Napravnik says, adding that if you’re racing for 3 miles, you don’t want a horse that has to be in front. Rather, you want the horse to remain relaxed and with the field for 2.5 of those miles before they begin racing.

Napravnik says she foxhunts her hurdle horses second field (where there’s no jumping, versus first field over large, solid obstacles) just to give them a change of scenery and to do something new.

“I’ve been known to take my hurdle horses to indoor local shows and do 2-foot courses,” she adds. “I just find that a well-rounded horse can be more successful regardless of what they’re doing … and if they’re going to transition to a third career, then they’re halfway there.”

An undercurrent of steeplechase life is a simple love and respect for the Thoroughbred. The sport is a viable second career that race owners might never have considered. If a Thoroughbred is unsuccessful in flat racing or reaches his ceiling, he still might make an excellent steeplechaser, all while cross-training in a third (or even fourth) career in the hunt field or show ring. 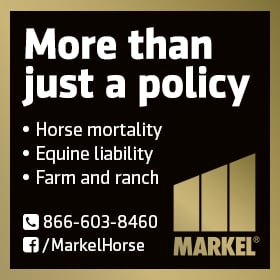