Taking the Worry Out of It

How to manage OTTBs that experience separation anxiety Some horses demonstrate distressed-sounding vocalizations if left alone in the pasture, for instance. Courtesy istock.com

If it hasn’t happened to you yet, it’s only a matter of time: You’ll be the one in the show warm-up whose horse is screaming for his buddies back at the barn. Or your OTTB will be the one running the fence line as his pasturemate heads down the trail for a hack.

Separation anxiety in horses is something many equestrians face. Understanding why it happens and how to manage it in a welfare-friendly way can lead to quieter, happier horses (and safer and probably less embarrassed riders, especially at shows!).

What Is Separation Anxiety?

It might seem like a simple concept — a horse gets nervous about or objects to leaving his equine buddies — but the root of separation anxiety can be complex. And, while it could be frustrating to manage, horses wanting to stay with friends is a completely normal part of equine nature.

“Despite having very few natural predators in this current time period, the horse still thinks of itself as a creature of prey — always on the lookout for something to attack it and knowing instinctively that there is safety in numbers,” says equitation science researcher and OTTB owner Camie Heleski, MS, PhD, an instructor and adviser in the University of Kentucky equine science and management program, in Lexington. “Practically everything in the horse’s nature intuitively cries out for staying in small to large groups.

“If we are honoring the factors that help horses to have a mostly positive state of welfare, we are likely keeping them with one or more other buddies — and this is good! But it does sometimes create these issues with separation anxiety.”

Horses exhibit signs of separation anxiety in a number of scenarios, Heleski says, the most common being when a handler removes a horse from a small herd (at which point the party left behind is often distraught, she adds) and when horses head to shows and other off-property excursions.

“When you take, say, two horses to a show — even if the horses didn’t know each other before getting into the trailer — they become fast friends in these situations,” she says. “And then when you arrive at the venue, you are likely dealing with multiple stressors and the horses may well call and call to one another. To most of us, it is obvious the vocalizations signal distress at being separated from one another.”

Heleski believes the scenario back at the farm is one of the best reasons to have three horses versus two; separation anxiety can usually be far less dramatic if there are two horses left in the pasture instead of one.

The best way to solve separation anxiety might be by simply approaching the issue differently.

It might take time, but there are creative and welfare-friendly ways to help horses become more comfortable with separation, she explains.

“For example, a while back, when I (lived) in Michigan, we had two horses,” she says. “At first the one who was left in the pasture would be very upset — lots of vocalizing, lots of running the fence line — but he could see the horse who was being worked in the arena.”

Heleski says she knew her fences were safe (an important consideration, she adds) and the horse left behind had no physical problems to aggravate, such as a history of tying-up or active musculoskeletal injuries, so she spent time helping the horse get used to being alone for short periods.

“I simply kept repeating (taking the herdmate out) until the horse left behind no longer reacted when we took out the other horse to work with,” she says. “I did often provide some high-quality hay for the left-behind horse to eat during the first couple of weeks,” and ultimately the issue subsided.

“There was still a bigger reaction when we loaded the one horse into the horse trailer to go to a show, and the left-behind horse would whinny, run the fence line, etc.,” Heleski adds. “The first few times I always made sure there was still a person at home to keep checking on the left-behind horse, but normally after about 10 to 15 minutes he settled down and was fine.”

“For a fair number of years, my daughter and I would take two horses to various shows,” she says. “Because they were turned out together all the time, they were quite bonded.”

Heleski says that bond made it difficult for the horses to stay focused when they separated to go to work. So, she started requesting stalls in separate barns at the competition venue, which solved the problem in her case.

“A little bit of a pain to go back and forth between two barns? Yes. But the horses were ever so much more focused when they basically each thought they were there on their own.”

Another example she shares was how she planned in advance to reduce the likelihood of separation issues arising among groups of racehorses: “When we used to transport horses to a racetrack that was an hour from our farm, we simply accepted that the horses would be ‘trigger stacked’ by dealing with transportation, new location, energy of a racetrack, etc. Taking just two horses and expecting one horse to be fine left in the stall while the other one did their workout simply was unrealistic; we would either take just one horse or we would take three to four horses so some could be out on the track and some could be in stalls next to one another.”

It might take some trial, error and creativity, and it will certainly take time but, says Heleski, “so far, I haven’t found a horse that we couldn’t ‘manage’ in terms of its separation anxiety/herdboundness.”

A word of caution: As with everything concerning horses, safety should always come first, and sometimes that will dictate how you can (and should) manage separation issues.

“It’s important for the trainer to know the level of expertise of the rider/handler they are working with,” Heleski says. “A quiet, confident handler can manage many things and help calm or soothe a horse who is worried about where its stable companion is. If the horse is able to feel confident in the human it’s with, often that horse’s concerns resolve rather quickly.”

Conversely, more nervous or less experienced riders or handlers might not be able to give the horse the confidence he needs to work through issues. In those cases it’s safest to manage the situation with a different approach.

“Years ago, I coached small dressage teams of four to five students who were riding horses who were pastured together for much of each day,” Heleski says. “For my more novice riders, we always took a ‘babysitter’ horse from the group down to the warmup area and near the show arena. That way the horse being ridden wasn’t at all concerned about where its pasture buddies were. And the babysitter horse was typically just fine to stand around and eat grass while the other horse rode its test.” So, do OTTBs tend to be more herdbound than other breeds? Not necessarily, Heleski says. “If anything, I’ve found them to be somewhat less likely to have an issue with it than certain other horses,” she says.

Though it varies from horse to horse, Heleski explains that many Thoroughbreds are weaned in relatively large groups versus bonded to just one other foal. Many of them go through the yearling sales, where they are expected to walk and stand with good manners by themselves. Further, many spend one or more formative years at the track where they frequently go to the track by themselves or in different groups and deal with different pony horses.

“Generally speaking,” she says, “I’ve found the OTTBs I’ve worked with since coming to Lexington four years ago to be more adaptable than ‘the average’ horse, and this has been an unexpected finding, if I’m honest.”

She’s even seen this with her own horses: “I have a 13-year-old Arabian who bonds quickly to any horse he’s turned out with; at the home farm, he’s totally fine being the one who is out of the pasture being worked, but will show distressed-sounding vocalizations if he’s left alone in the pasture or if he’s, say, put temporarily in a stall without his friend (nearby). The 4-year-old OTTB enjoys having friends in the pasture but is far, far more comfortable doing his own thing where and when needed. He very rarely shows any distressed vocalization at being separated.”

While it can be a frustrating problem to deal with, there’s nothing unnatural about horses being anxious when they leave their herdmates and vice versa. The key is finding a healthy way to manage their stressors.

“I sometimes hear from people that their horses have to be housed individually (with no ability to socialize with other horses) in order to avoid this whole separation anxiety issue, and that makes me really sad,” Heleski says. “We just need to be a little more creative and/or persistent so that horses can still live a somewhat normal life. If you can manage to think like a horse, you can solve almost anything.”

This article was originally published in the Fall 2020 issue of Off-Track Thoroughbred Magazine, the only publication dedicated to the Thoroughbred ex-racehorse in second careers. Want four information-packed issues a year delivered to your door or your favorite digital device? Subscribe now! 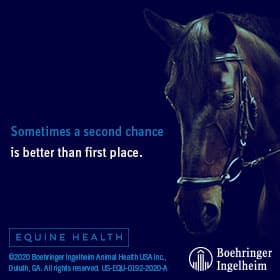