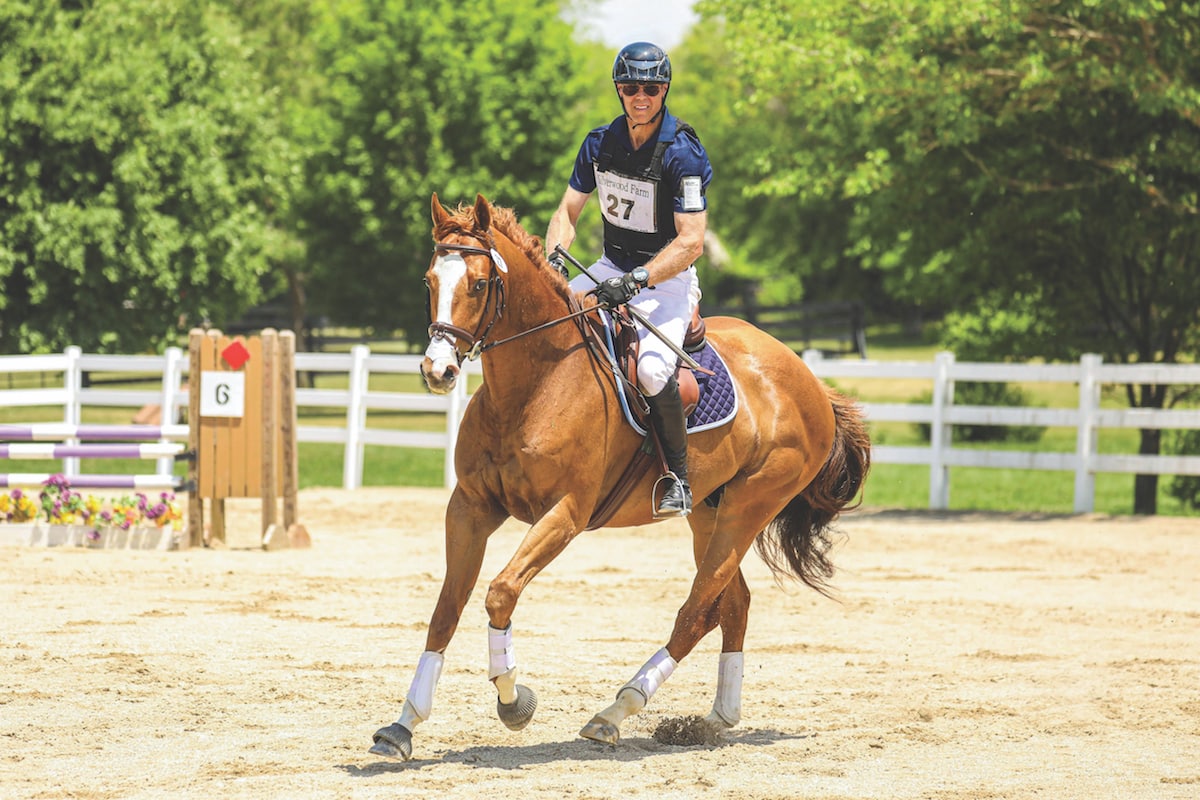 Eric Dierks begins each ride with a mindset and approach called “sitting well” that can be applied to any discipline. Courtesy Josa Comstock Photography LLC

In a pivotal scene of the sports drama film “For the Love of the Game,” the protagonist, Billy Chapel, played by Kevin Costner, is close to pitching the perfect game. Most fans are cheering, some are jeering, and the deafening cacophony nearly overcomes Chapel. But then — after a classic ’90s electric guitar riff, of course — he steps into his pitching stance and says to himself, “Clear the mechanism.” The background blurs, the din falls away and he’s able to focus. Under his breath he greets the batter on the mound, calmly and self-assuredly: “Hello, Mike.”

If only it were this easy to block out distractions — be they upcoming horse shows, life’s stresses or surrounding farm activity — and just ride the horse that’s beneath us. Our off-track Thoroughbreds are sensitive, agile and bred to be quick. If we are preoccupied, it can lead to a detached, unproductive training session or, worse, an explosive argument. Further, if we are hyperfocused on results, it can be counterproductive, says Eric Dierks, an eventer who trains at Stonehenge Farm, in Union Grove, Wisconsin.

Dierks, who was long-listed for the 2002 World Equestrian Games and short-listed for the 2004 Olympics, has trained many horses over his career, the bulk of them OTTBs. He begins each ride with a mindset and approach that has worked for him and his students, and it can be applied to any discipline. It all starts with a concept he calls “sitting well.”

Accepting the Horse Beneath You 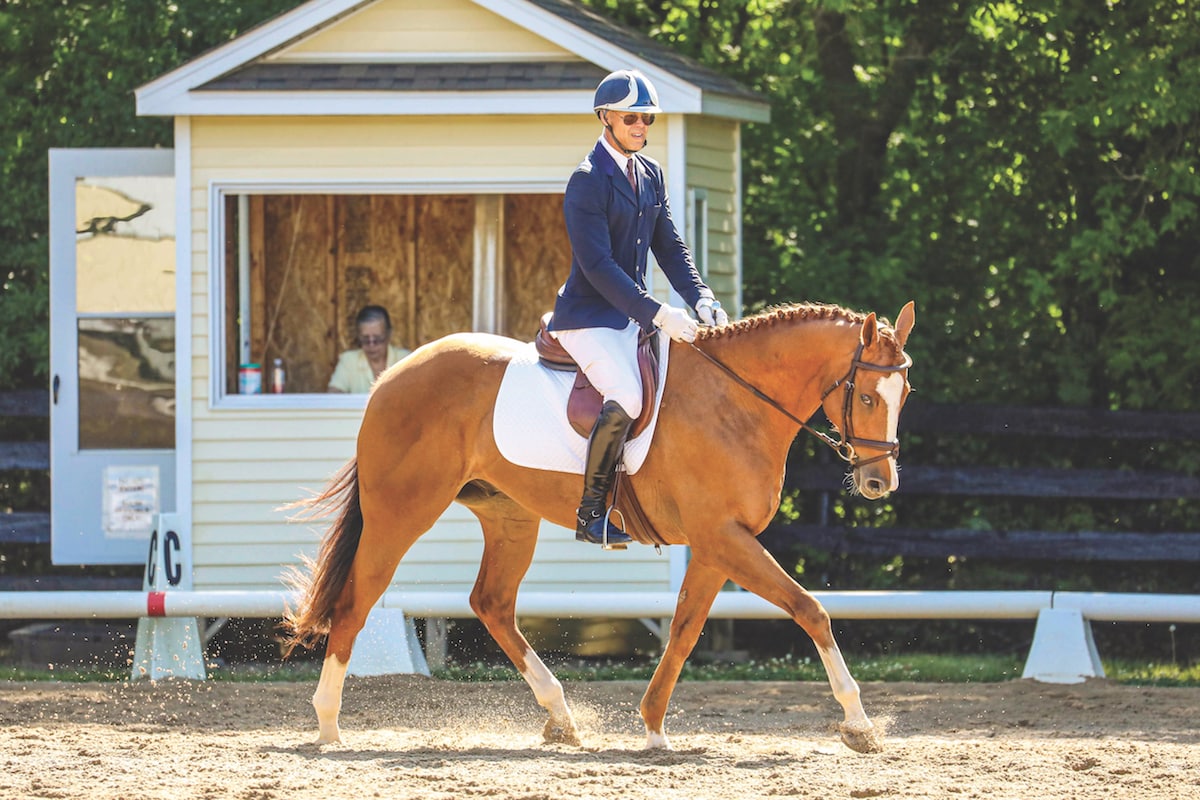 When you have connection with your horse, and he seeks your aids, you’ve essentially achieved harmony. Courtesy Josa Comstock Photography LLC

Each time Dierks swings his leg over a horse and takes a seat, he begins assessing.

“What I mean by sitting well is you’re able to accept where you’re at in the present moment with the horse you are on,” says Dierks. “You’re clear on where you want to go, and you’re accepting the results of whatever you get in your journey there.”

When you’re sitting well as a rider, he explains, you’re not just physically sitting well, equitation-wise, but sitting well with your head. You’re not emotionally tied to a desired ride outcome — or the horse’s career outcome, for that matter. You’re also not obsessed with control. You’re setting performance anxiety, time or the thought of getting hurt off to the side and simply looking at your starting point for the day.

First, notice your horse’s current workload. Where is he mentally? Is he accepting your weight? Notice how he accepts and carries it. Then the workload expands to motion as you ask him to move forward. The horse needs a leader, and you fill that role by looking for:

■ Rhythm: Dierks describes this as an established speed, with measurable stride length, sitting power and thrust.

■ Connection: The horse seeking your aids in that rhythm and direction. Essentially, harmony.

You might recognize these qualities as part of the dressage training scale (rhythm, relaxation, connection, impulsion, straightness and collection). While Dierks utilizes the scale, he says rhythm, direction and connection are the three concepts that best encapsulate it.

“It’s very important that you recognize you’re not in control of rhythm, direction or connection, but you’re allowing the horse to find their rhythm, direction and connection as you complete deliberate exercises,” he says. “As soon as the rider can accept that they’re not in control, the sooner they’re going to be able to accept whatever the horse does underneath them.

“Control leads to counteraction that is not reasonable to the horse,” he adds. “They are only going to counteract with their instinct, which is fight or flight. The conversation turns to static.”

Once he’s sitting well and riding from a place of acceptance, not control, Dierks focuses on rhythm.

If a horse isn’t reaching, don’t resort to driving him forward with your aids, he says.

Never let the horse go dormant and at his own pace.

“He always needs to carry some kind of workload,” says Dierks. “You could do transitions in and out of the walk and trot, and canter is a great gait to teach the horse reaching power. If the horse likes to travel wide behind, I do leg yields (on a circle or the straight), so I can get him to reach laterally, as well.

“Cavaletti exercises, the single cavaletti, really teaches the reach,” he adds. “If you do, say, three or more cavaletti, you’re teaching the very essence of rhythm.”

Improving rhythm isn’t limited to riding. Ask a horse to march with you — not putter along behind — when you’re leading him. “Horses are not traditionally rear-wheel drive. They like to pull themselves along with the front end,” Dierks says. “Give him a little rap-a-tap-tap behind your body with the stick and say, ‘Come on buddy, move on,’ rather than pulling them along. Then you’re already on track to getting your horse to uphold his rhythm.” 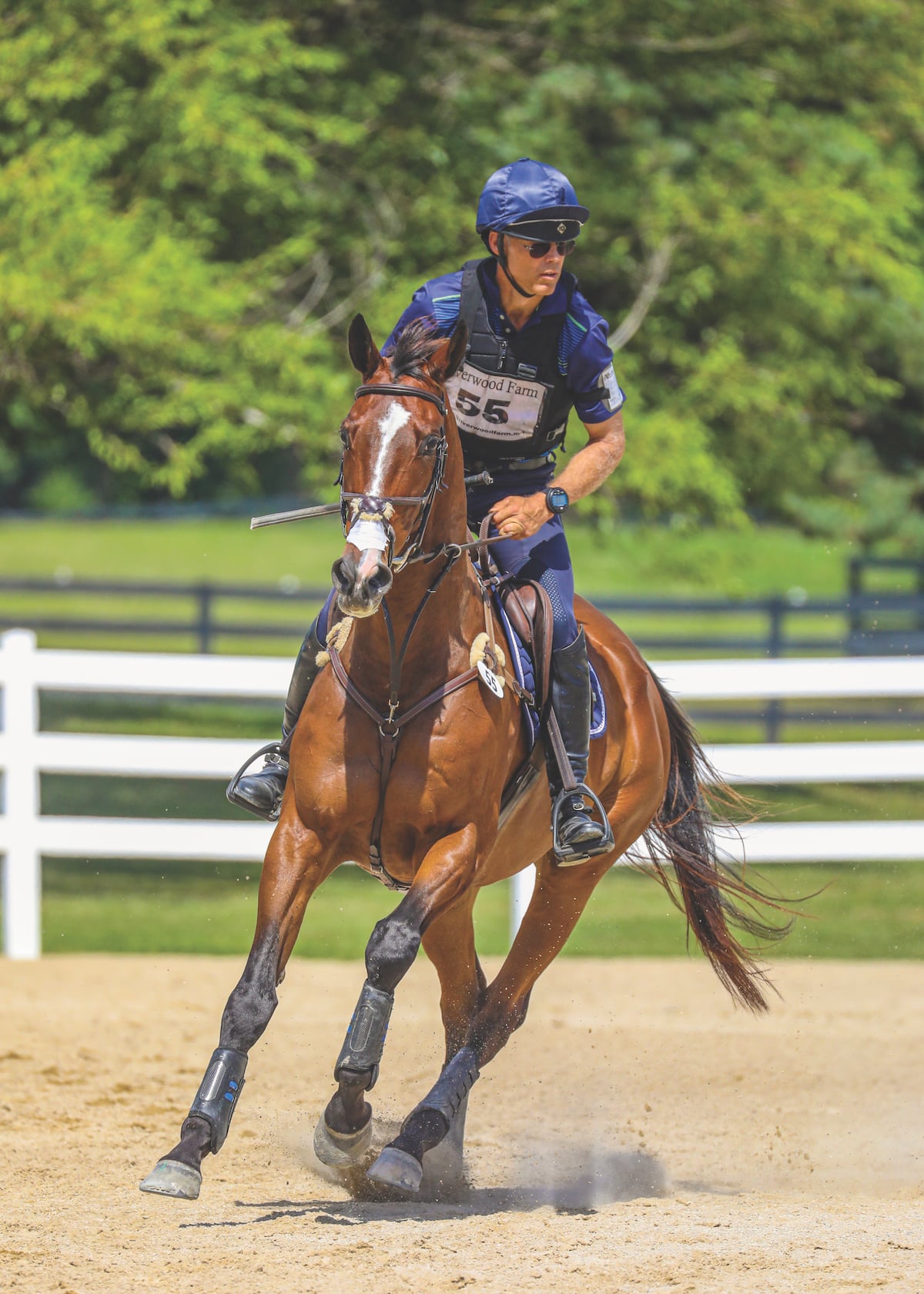 Dierks says he always rides on a very intentional track, encouraging horses to reach up under their center of gravity with their stride. Courtesy John Borys Photography

Dierks says he always rides on a very intentional track, encouraging horses — which, again, when left to their own accord typically travel on the forehand — to reach up under their center of gravity with their stride. This encourages both lateral and longitudinal balance.

He does this by increasing the workload, 1% at a time. For instance, by riding the horse on a narrower, more deliberate path, he’s increased the workload. If he makes his figures tighter or changes direction, he increases the workload another 1%. He builds it 1% more by slowing his tempo or adding a downward transition (using his seat and upper body, not hands) and seeking more of a “sitting” stride, or an upward transition, where he encourages a thrusting stride. How far he progresses in a ride with each horse, of course, depends on the animal’s physical ability, maturity and understanding.

What direction isn’t: The rider who takes a very passive approach, staying out of the horse’s way and not giving any leadership. When on a trail ride or hack this might look like the individual who keeps the horse’s environment very “sterile,” avoiding any possible scenario that might cause a spook, rather than marching confidently toward or past it.

Rather, the rider is active, asking.

Inevitably, the horse will try to evade in one of three ways, says Dierks:

1. Avoiding the contact (by raising or tossing the head or overbending).

2. Going crooked on the line of travel.

3. Getting behind the leg, resulting in short, lazy strides or running on the forehand.

If this happens, get back to focusing on sitting well, resuming the rhythm, pointing it in a direction and increasing the workload incrementally.

“If I can get the horse to lengthen or keep the long stride and sit (on his haunches), now we’re going to halt,” he says. “Now we’re going to thrust from that halt before the horse falls behind my leg and then half-halt, which basically gives you a stronger sense of rhythm.”

Recognize that most horses can’t sustain balanced rhythm for more than six to eight strides. This is where the half-halt comes in — a brief interruption of the rhythm with a hold and release of the aids to influence the reach, sit and thrust of their stride, says Dierks.

While you want to avoid having an agenda each time you ride, you’ll need a basic plan.

“All the exercises I do have a beginning and end, and I call it doing the numbers,” says Dierks. “I do X amount of transitions, X amount of turns, X amount of jumps … all in the context of rhythm, direction and connection,” increasing the workload as needed to achieve balance.

Our baseball movie protagonist Billy Chapel didn’t just draw on silence and laser focus when he “cleared the mechanism” during that perfect game in progress. He fell back on years of repetition and practice on the pitching mound, calling on muscle memory and correct feel. Doing the numbers does the same for the rider.

Measure progress over time and move on to another exercise before progress plateaus. “The enemy of good is better,” says Dierks. “Make sure that the repetition is not about the result but how consistently you communicate.”

If you find that your horse becomes more tense, you might have increased the workload too quickly or he might not be clear with the exercise. In this case, back off: You might adjust your line of direction to be a little wider or change the gait in which you do the exercise.

“That’s part of listening to your horse,” he says.

Signs You’re Riding With a Personal Agenda vs. Listening to Your Horse

Ask yourself anytime, but especially in the warmup:

■ Am I lacking rhythm and direction?

■ Am I wrestling with my horse?

■ Am I focused on trying to control my horse?

If the answer to any of these is yes, then you’re probably riding with an agenda and need to reset your focus on sitting well. Here’s an exercise to help:

Let go of the reins, then hold the buckle. Then take up the reins by pulling them through your other free hand to the desired rein length, kind of like riders do on cross-country after a down bank. Repeat this several times, focusing on the task alone.

Next, put your horse on a line of direction — so, a 20-meter circle, a serpentine or down the long side of the arena — that’s far ahead of the horse, at a desired speed.

Don’t just coast along and do the same thing for circles at a time; be deliberate about increasing the horse’s workload, 1% at a time, with challenges like transitions, turns.

Rhythm and direction and, finally, rein contact meld in this moment. 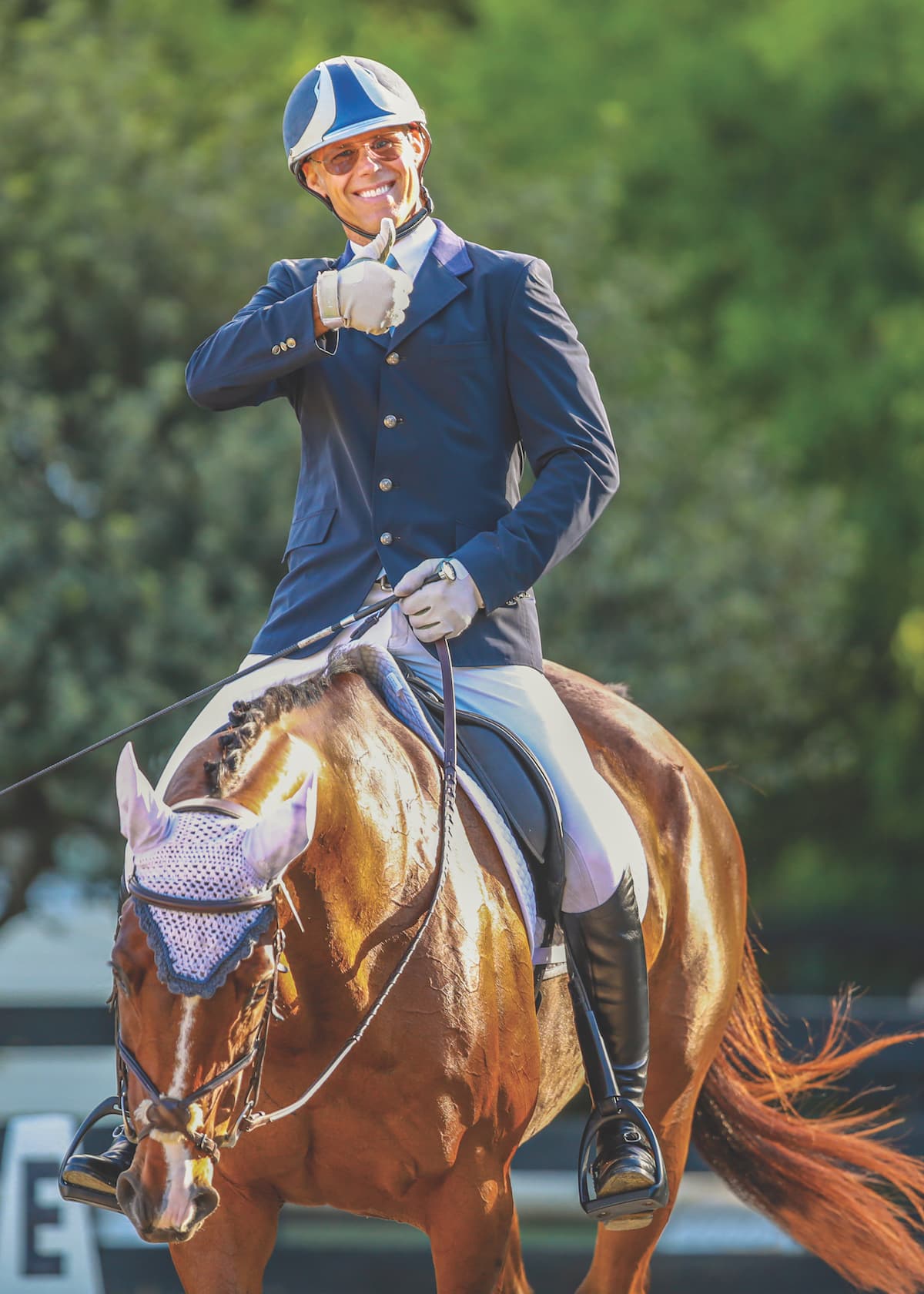 Sit well during each ride, and do your numbers with rhythm, direction and connection, and you might be surprised what you learn from your horse and the progress you make with your partnership. Courtesy John Borys Photography

Dierks believes most competitors are so results-driven they have difficulty sitting well and accepting their current circumstances or training results.

Sit well during each ride, and do your numbers with rhythm, direction and connection, and you might be surprised what you learn from your horse and the progress you make with your partnership.

■ Time: It can seduce you into thinking you have a deadline for a result.

■ Performance Anxiety: Trying to get a result for somebody else and not yourself.

■ Fear: Whether it’s of getting hurt, overfacing a horse or another cause.

This article was originally published in the Fall 2021 issue of Off-Track Thoroughbred Magazine, the only publication dedicated to the Thoroughbred ex-racehorse in second careers. Want four information-packed issues a year delivered to your door or your favorite digital device? Subscribe now! 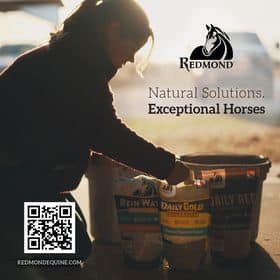