Shoeing at the Track

Shoeing the racehorse is not the same as shoeing the sport horse — learn about the differences. Compare the aluminum racing plate in the middle to steel draft horse and pony-sized shoes on either side of it. Courtesy Tracy Gantz

Just as a saddle must fit both horse and rider, a horseshoe must fit both athlete and sport. A Clydesdale pulling a wagon in a parade down a paved street requires a much bigger and heavier shoe than a hunter-jumper performing in a manicured dirt arena.

Likewise, Thoroughbred racehorses wear specialized shoes that protect their feet without interfering with their speed.

Most horses that require shoes wear some version of a steel plate, but not racehorses.

“Racehorses run in aluminum shoes because they are lighter,” says Ada Gates Patton of Pasadena, California. She was the first woman licensed by a racing commission to shoe Thoroughbred racehorses on the track in the United States and Canada and did so for 15 years. She now owns Harry Patton Horseshoeing Supplies, in Monrovia, California, and is the horseshoe inspector for the annual Rose Parade.

“Weight (feels) heavier the further you go,” she says. “If you carry a basket of laundry, and you’re walking down the road with it, by the time you’ve gone three blocks, it’s gotten heavier and heavier.”

Because winning or losing a race can depend on mere hundredths of a second, shoe weight can make a huge difference.

“Feet are a horse’s survival tool,” says Gates Patton. “As prey animals, they run away. So they have tremendous sensitivity about their feet.” While the difference in weight between a racing plate and a normal steel shoe might not seem much to us, horses notice the difference, and it can impact their stride at top speed.

Another key factor when a racehorse is barreling down straightaways and around turns is balance.

“The racehorse is shod every 30 days and has a short foot,” says Gates Patton. “We don’t do a big trim, but it’s a trim that makes a measurable difference to the horse in his breakover (the moment each heel lifts off the ground), his speed of breakover and getting on to the next stride. His mission is speed and breakover.”

Even though the aluminum shoe is lightweight, it still protects the foot well. Horses at racing speed are hitting the ground with great concussive force, Gates Patton says, which is why very few racehorses compete barefoot.

While each racehorse is different, most tend to race about once a month. That schedule allows trainers and farriers to consult on whether they should make any shoeing changes from race to race.

Just as with regular steel shoes, farriers can modify aluminum racing plates to help the individual horse. Triple Crown winner American Pharoah, for example, bruised his left front foot as a 2-year-old. Trainer Bob Baffert and farrier Wes Champagne decided to outfit him with a half-plate to protect the top half (toward the toe) of that foot’s sole. The colt wore that shoe type throughout his 3-year-old season, which included his Triple Crown run and victory in the Breeders’ Cup Classic.

“Bruises, abscesses, quarter cracks and hitting (forging or interfering) are the top issues that farriers and trainers address together,” says Gates Patton.

Bruises and abscesses can plague racehorses just as they can other equine athletes. In these situations, trainers work with their veterinarians and farriers to decide what therapeutic measures to take. The farrier’s knowledge and skill direct how he or she will modify the shoe to help protect the tender area.

Quarter cracks (fissures in the widest part of the hoof wall that usually appear at the coronary band and grow toward the ground) can be more serious and might require stall rest or turnout. Sometimes farriers can patch minor quarter cracks, allowing the horse to continue racing.

Hitting occurs when a horse’s natural stride causes one of his hooves to strike another limb. Corrective trimming and shoeing can adjust the stride in some cases so the horse no longer hits himself.

Corrective trimming often begins on the farm, when the horse is young. As with any horse, regular trimming early can help a foal grow into a conformationally correct adult. If a Thoroughbred is prepared for an auction as a yearling, he is even more likely to be trimmed frequently.

Because racehorses are handled so young and so often, they usually behave very well for shoers.

“Racehorses are beyond broke for shoeing,” says Gates Patton. “They just stand there. That’s a big plus when a racehorse goes into a second career.”

Racetrack farriers have several other shoe options besides standard aluminums, including glue-on shoes. These can help horses that don’t have strong hoof wall. They can also be useful if a horse is recovering from an issue such as an abscess, which can weaken part of the wall to the point that the foot can’t take a nail.

“Glue-on shoes are a tremendous boon to all horses, but especially to racehorses,” says Gates Patton. “They can serve a very good purpose. The decision to use them is made in concert with the trainer and the shoer.”

She says one disadvantage to a glue-on shoe is that it might not stay on as well as a traditional shoe with nails.

“A shoe is under much more stress during a race than the shoe of a backyard trail horse,” says Gates Patton. “When that hoof hits the ground, the heel hits first and then slides and breaks over to go onto the next stride. There is a lot of shearing going on during that slide process. If the track is muddy, deep or sticky, it’s going to really grab that shoe,” potentially pulling it off.

Racetracks keep a farrier on call in case a shoe comes loose before a race. Sometimes the track delays the race while a farrier quickly replaces a shoe. For example, in late 2010 as rain pelted Hollywood Park in Southern California, millionaire Comma to the Top lost his right hind shoe in the mud when walking from the barn area to the paddock. Though it took a while to replace the shoe, the horse went on to win that day’s $750,000 CashCall Futurity. Depending on the time of year and the weather, farriers can modify racing plates to give a horse better traction. Rain is the biggest culprit, because a muddy track can get slippery. Trainers monitor exactly what type of wet track they are dealing with, and if they deem it necessary, they ask farriers to put on traction devices.

“You can customize the shoe for the surface,” says Gates Patton. “The morning of the horse’s race, you can put on stickers,” which are similar to calks or “studs” used on sport horses.

The farrier could replace the shoe with one that has traction devices already built into it. Most of the time, though, farriers add jar calks or mud nails to a normal shoe for traction.

After the race, the farrier removes the devices so they won’t interfere with the horse’s stride over normal surfaces.

Many times, racetrack officials announce the use of “stickers” to bettors. It is important that the public knows which horses are wearing stickers, so they can incorporate that knowledge into their race analysis before placing a wager.

No matter what devices farriers use, their goal is the same: to give each horse the best opportunity to run to his potential.

“My goal is that he has a perfectly flat, balanced foot under his leg,” says Gates Patton, “so that he has the most perfect stride he can have.”

This article was originally published in the Spring 2017 issue of Off-Track Thoroughbred Magazine, the only publication dedicated to the Thoroughbred ex-racehorse in second careers. Want four information-packed issues a year delivered to your door or your favorite digital device? Subscribe now! 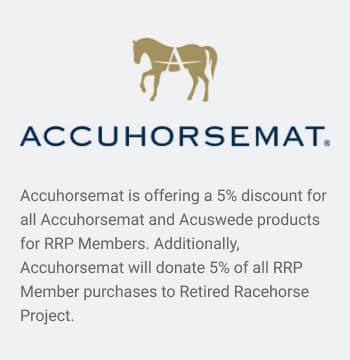