Thoroughbreds have played a critical role in the development of modern-day Warmbloods. When discussing the rise, fall and rebound of the Thoroughbred in sport, we often refer to the “Warmblood invasion” — that era starting in the 1980s when European horses began working their way to the tops of competition leaderboards and Olympic podiums. The irony of this movement, however, is that without Thoroughbred blood, Warmbloods never would have evolved into the athletes they are today.

From Carthorse to Competitor

Most Warmbloods originated in Germany, including the Hanoverian, Holsteiner, Oldenburg, Westfalian and Trakehner. Other popular European breeds include the Selle Francais, Belgian, Dutch and Swedish Warmbloods and more.

If you look at photos of European horses from the early 1900s, you’ll see stocky, heavy animals — horses designed to pull carts, carriages and plows. For centuries they had been bred for agriculture, coach and cavalry, with suitability for pleasure riding secondary. With the rise of modern transportation and the mechanization of the tractor at the start of the 20th century, however, equine pulling force became less important. And with the conclusion of the two World Wars, their role on the battlefield became obsolete.

Most Warmblood history books identify the 1960s as the decade demand for pure riding and show horses rocketed. And breed federations adapted their goals accordingly.

“In the early 1960s the German Oldenburg breeding association made the decision to switch to the modern riding horse and embarked on an extensive cross-breeding program,” says Ekkehard Brysch, CEO of the Oldenburg Registry North America and International Sporthorse Registry. “As the first step of the new breeding program, Oldenburg mares were bred to top Thoroughbred stallions for refinement.”

What better breed to infuse athleticism and refinement into the Warmblood than one that had been bred specifically for performance and carrying riders for centuries? The English Thoroughbred became Warmblood registries’ preferred “refinement breed” — Arabians, Anglo-Arabians and Trakehners being other examples.

“If we didn’t continually lighten the population with Thoroughbred blood, the animals would revert to their origins as agricultural horses,” says Hugh Bellis-Jones, executive director of the American Hanoverian Society (AHS), who spent 18 years working at Spendthrift Farm, in Lexington, Kentucky, when it stood the likes of Seattle Slew, Affirmed and Raise a Native.

The Thoroughbred’s trademark resilience, speed, athleticism and galloping style passed on, as well.

Authors of The Holsteiner Horse, a book on history, breeding and performance, wrote that the breed already possessed boldness, strength and steady nerves. “The moderate infusion of Thoroughbred blood sharpened assets such as galloping stride, speed and staying power and forged the iron into steel,” they wrote.

“These assets,” adds Wendy Webster, breeder of Holsteiners for eventing and former American Holsteiner Horse Association board member, “mean that we are seeing more and more Holsteiners competing at the top levels in eventing. Combined with the phenomenal jumping genetics of the Holsteiner, the result is a tough, athletic horse that can answer the complex questions required to compete to the international levels.”

Within just a few decades the Thoroughbred’s popularity as Warmblood breeding stock soared.

By 1970 Thoroughbreds and their offspring comprised 86 percent of the Holsteiner stallion population. In a study analyzing the pedigrees of Oldenburg stallions presented for registry approval from 2006 to 2011, Dr. Meyer-Gerbaulet of Bulgaria’s Trakia University Stara Zagora traced them all back to 12 Thoroughbred stallions and a group of Trakehners. And Sitzenstock reported in his study that by 2007, 96% of Hanoverians had some degree of Thoroughbred blood. The type of modern sport horse most Warmblood breeding programs aimed to produce was (and still is) “a noble, large-framed and correct horse with dynamic, spacious and elastic movements, well-suited for dressage, hunter classes, show jumping or eventing because of its temperament, character and rideability,” says Brysch.

When evaluating Thoroughbreds for Warmblood studbook inclusion, most breeders were more concerned about conformation, soundness and temperament than performance on the track.

“Race record doesn’t matter so much,” says Arts. “The horses that don’t have the speed are the stallions or the mares that are more useful for Warmblood breeding.”

The committee that decades ago assessed potential Thoroughbred stallions for the Dutch Warmblood book, for example, placed a horse’s soundness, willingness to perform and number of starts over how fast he ran or how high he placed. A speedy 2-year-old that retired after a few races wasn’t likely to make the cut.

And, to be accepted as a performance and refinement sire for any German Warmblood registry, a Thoroughbred must have carried a minimum weight of 80 kg (176 lbs) on the track.

Naturally, a number of Thoroughbred stallions launched now-famous lines of Warmblood performance horses. Going back to the 19th century, three of the four foundation Hanoverian stallion lines were English Thoroughbreds: Adeptus xx, Devil’s Own xx and Goldschaum xx. (The double x denotes a Thoroughbred.) Two of the most successful Hanoverian stallions in modern times are Prince Thatch xx, noted sire of many FEI dressage horses, and Lauries Crusador xx, 2006 Hanoverian Stallion of the Year. Warmblood breeders look for Thoroughbred mares with an uphill trot, rear impulsion, elasticity and freedom in the shoulder, as displayed by Flareon xx, a 2008 mare by D’Wildcat. Courtesy Alicia Frese

Today, the number of Thoroughbreds accepted into studbooks has dwindled. Most modern Warmbloods have a percentage of Thoroughbred blood, and there’s less need for continued refinement.

“We still need blood, we always need to have blood to have more carefulness and more stamina, especially in the eventing world,” says Arts, but he notes that many of today’s breeders look for stock that have Thoroughbreds in their second and third generations, rather than being purebred.

Registries do, however, still accept Thoroughbred mares and stallions of exceptional quality.

“Most Warmblood studbooks have what we call an open studbook,” says Bellis-Jones. “We primarily enter Hanoverian-papered stallions or mares into our breeding program, but our rules permit the entry of horses from outside populations … provided they have an eligible pedigree.”

“We accept the best available breeding stock (among Warmbloods, Thoroughbreds and Arabians), regardless of breed and brand,” adds Brysch.

This is particularly advantageous in North America, where breeders have more access to quality Thoroughbred mares of various bloodlines for sport horse breeding than in Europe. “We feel very strongly that the quality of foals the Oldenburg breeding program in North America has produced over the last 35 years proves that the registry is on the right track,” says Brysch. “It pays off to have accepted Thoroughbred mares into all books from the very beginning of the breeding program.”

Warmblood studbooks are naturally stricter about accepting horses from outside populations than they are their own breed. “We only want to take the best examples of the breed,” says Bellis-Jones.

“We’re very strict on trot for Thoroughbreds,” says Bellis-Jones. “We want a trot that is uphill with impulsion from the rear and good elasticity and reach and freedom in the shoulder.

“We want good limbs on mares we grade into the Studbook,” he adds. “We don’t want back or over at the knee, no toeing in or out — basically the same criteria you’d look for in a yearling at the Keeneland (Race Course) sales. Good conformation is good conformation.”

You can’t just grab a mare off the track, breed it to a Warmblood stallion and expect to get a dressage horse or a show jumper, says Arts. “You need to breed beautiful Thoroughbred mares with great conformation and traits that you’d like to see in a dressage horse or a jumper,” he says. “Using those mares for the Warmblood breed is obviously very beneficial and very interesting.”

Registries such as the Hanoverian Society accept Thoroughbred stallions, as well; the AHS currently has three active ones, says Bellis-Jones. He says these horses must not only have the conformation and movement to pass a physical inspection but also meet strict performance requirements. So, a prospective Thoroughbred stallion must have a stellar upper-level eventing, show jumping or similar record to be accepted into the book.

Thoroughbreds have played a critical role in the development of all modern-day Warmbloods. With their elegance and athleticism they effectively elevated workhorses into performance horses. While not as heavily infused into the Warmblood population as they were in the 20th century, breeders still pull from the Thoroughbred’s desirable traits — traits that are the foundation of what we love so much about this breed. Ex-racehorse Stiring Up Demons was accepted into the Hanoverian breeding program in part because of her phenomenal trot. Courtesy Hugh Bellis-Jones

Open Warmblood studbooks might offer off-track Thoroughbred mares another option post-racing. The Jockey Club has even provided an avenue for transitioning mares into these studbooks.

“What The Jockey Club offered us was the opportunity to obtain registration information such as markings, access to DNA profiles and facsimile papers for mares so they could be inspected for our Studbook,” says Patricia Donohue, American Holsteiner Horse Association registrar. “Our rules, as do the other registries, stipulate that all eligible mares have registration papers. It made it very difficult for owners that had acquired mares off the track but not their registration to present them to us for inspection. This was an innovative step by The Jockey Club to support the breed during the drastic equine downturn in 2007-2008.”

“The Jockey Club strongly encourages and are supportive of our efforts to take Thoroughbreds that are off-track into our breeding program,” says Hugh Bellis-Jones, executive director of the American Hanoverian Society (AHS). “They want these mares to find a new purpose after racing as much as we do.”

The horses he’s talking about are the ones that are beautifully conformed but, perhaps, not royally bred or successfully raced. “You will see that all of these mares have marginal pedigrees for racing and Thoroughbred breeding purposes,” he says. “We would not expect to see mares by … Tapit presented to the AHS for obvious reasons, as their value lies elsewhere.”

Bellis-Jones’ own Stiring Up Demons, a 23-year-old Demons Begone mare, is a shining example. He and his wife bought her as a riding horse for their daughter, who evented her for several years. “Demi” had such “phenomenal trot movement,” however, that Bellis-Jones wanted to see if she could get accepted into the Hanoverian breeding program. In 2003 she scored an overall 7.16 (plus an exceptional 8 on her trot) to put her in the AHS Studbook. In 2006 she passed the performance test with flying colors to enter the Main Studbook. Now retired after producing several Hanoverian-papered foals, Demi still resides on Bellis-Jones’ farm.

“She’s the classic case of an OTTB that wasn’t a great race mare but found a new lease on life as a broodmare for a Warmblood breeding association,” he says.

This article was originally published in the Spring 2018 issue of Off-Track Thoroughbred Magazine, the only publication dedicated to the Thoroughbred ex-racehorse in second careers. Want four information-packed issues a year delivered to your door or your favorite digital device? Subscribe now! 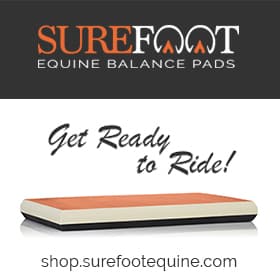