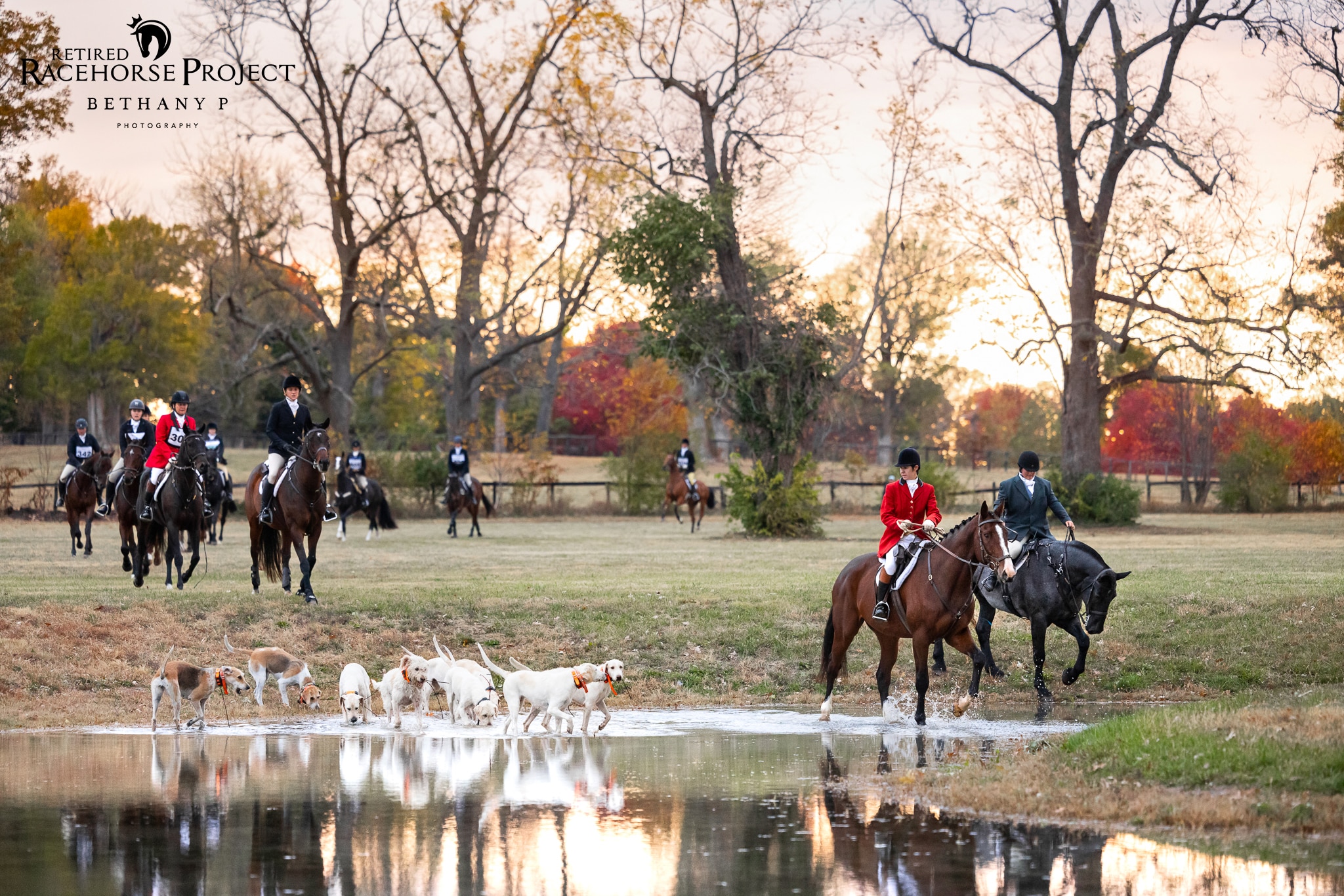 Preliminary competition in all ten offered disciplines at the 2022 Thoroughbred Makeover and National Symposium, presented by Thoroughbred Charities of America, is now complete and the stage is set for Saturday’s Finale Championship.

This year marks a new format for preliminary and Finale competition: the five top-placed horses in each discipline will proceed to the Finale, but will start on a fresh score, rather than combine scores with preliminary marks. Preliminary placings for the top 10 in each discipline overall as well as in the amateur, junior and team divisions will be awarded on Friday evening at the return of the Awards Party. Special awards, sponsored by state breeder associations and private individuals, will also be awarded at this time.

The Thoroughbred Makeover continues on Friday with the TERF Makeover Master Class, featuring polo professional Jorge Vasquez working with participants through flat work exercises to introduce green horses to the sport of polo. The Master Class will livestream for free at TheRRP.org/livestream starting at 9:00 AM. The Makeover Seminar Series, sponsored by TheHorse.com, begins at noon with webinar format available for free at TheRRP.org/seminars.

Thoroughbred Incentive Program (T.I.P.) Championships kick off on Friday and run through Saturday in western disciplines plus dressage. Learn more at tjctip.com.

Let’s get to know the preliminary winners of each discipline. Full results and scores for all disciplines can be found at TheRRP.org/makeover-results. 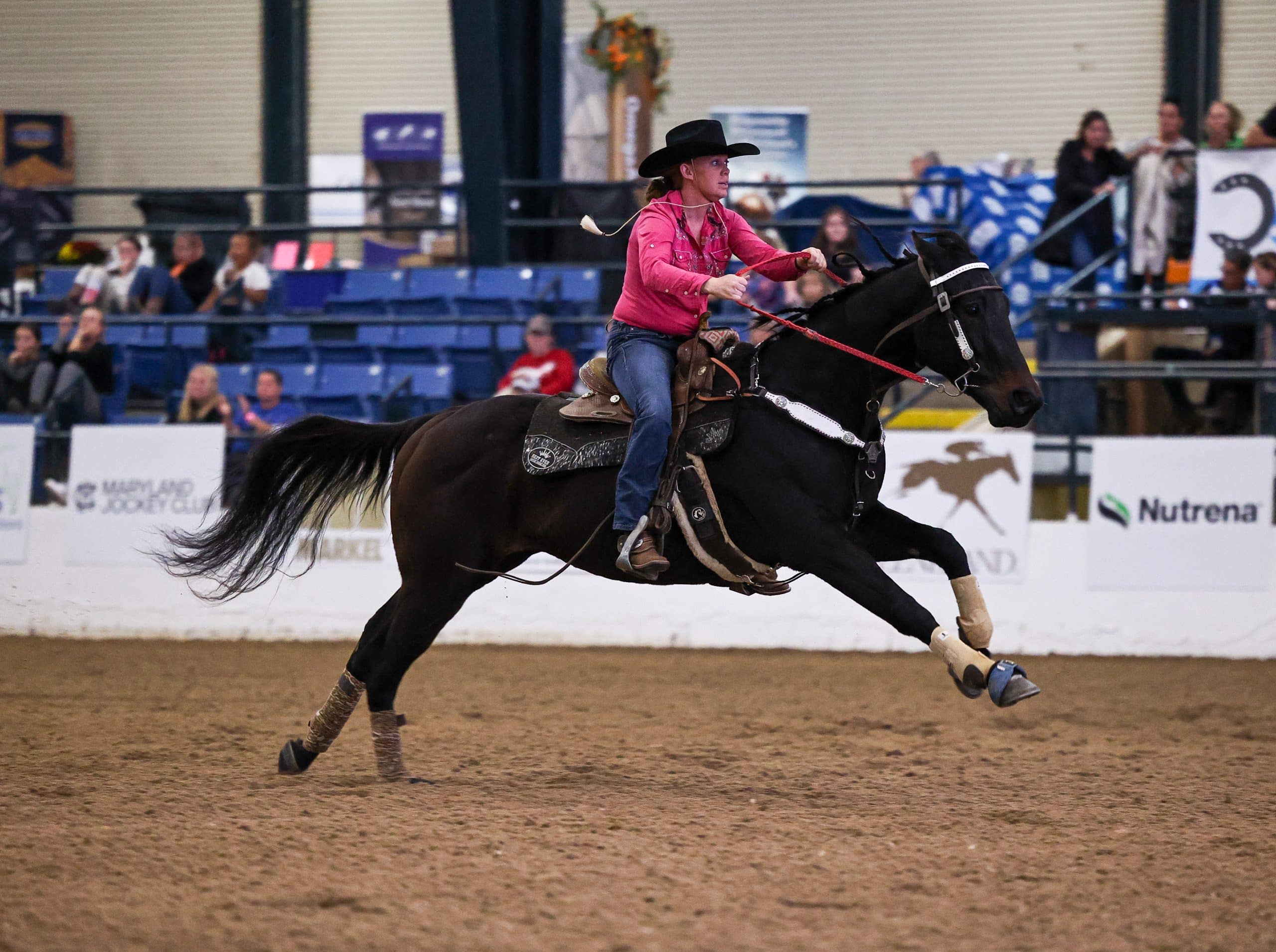 Not Gonna Happen might not be Brooke Frederick’s first Thoroughbred she’s retrained, but he’s her first Makeover horse. Encouraged by her sister Jessica, who won the 2021 Barrel Racing discipline at that year’s Thoroughbred Makeover, Frederick entered the unraced gelding. While he was initially intended to be a resale project, he’ll be part of her family now for the foreseeable future. After a solid horsemanship test, Not Gonna Happen ran the second fastest time on Wednesday and the fastest time on Thursday.

“I’m really proud and happy to have him,” said Frederick, a professional from Magnolia, KY. “He wants to work. He wants a job. He takes everything with such grace and pride, and he’s been so easy. He was loping the barrel pattern within two weeks.” 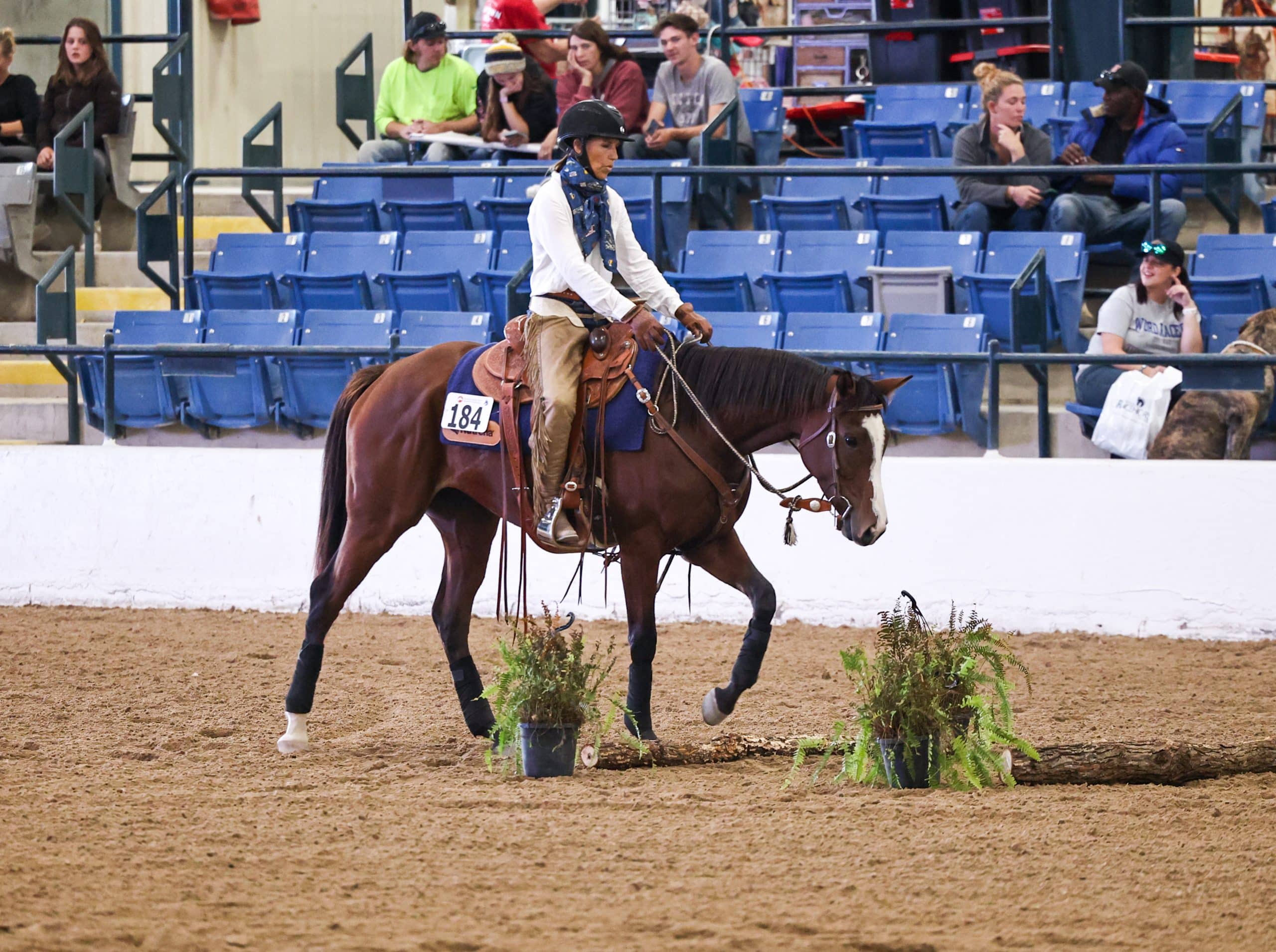 Makeover veteran Toni Harmon, an adult amateur from Harvard, IL, has a strong history in both the Competitive Trail and Ranch Work disciplines, though her Ranch Work performance on Wednesday with Diggin For Dough did not go as planned. What impressed Harmon the most, however, was how confidently Diggin For Dough moved forward and came back for Thursday’s Competitive Trail performance, laying down a confident performance to win the discipline.

“She’s sensitive, but she’s super brave and willing,” said Harmon. “There were things on the course she and I had never seen before, but she did everything so well. She is such a trier — we haven’t been able to practice any water and she went right through. She’s like all of the Thoroughbreds I’ve had: just so special. I never want any other kind of horse.” 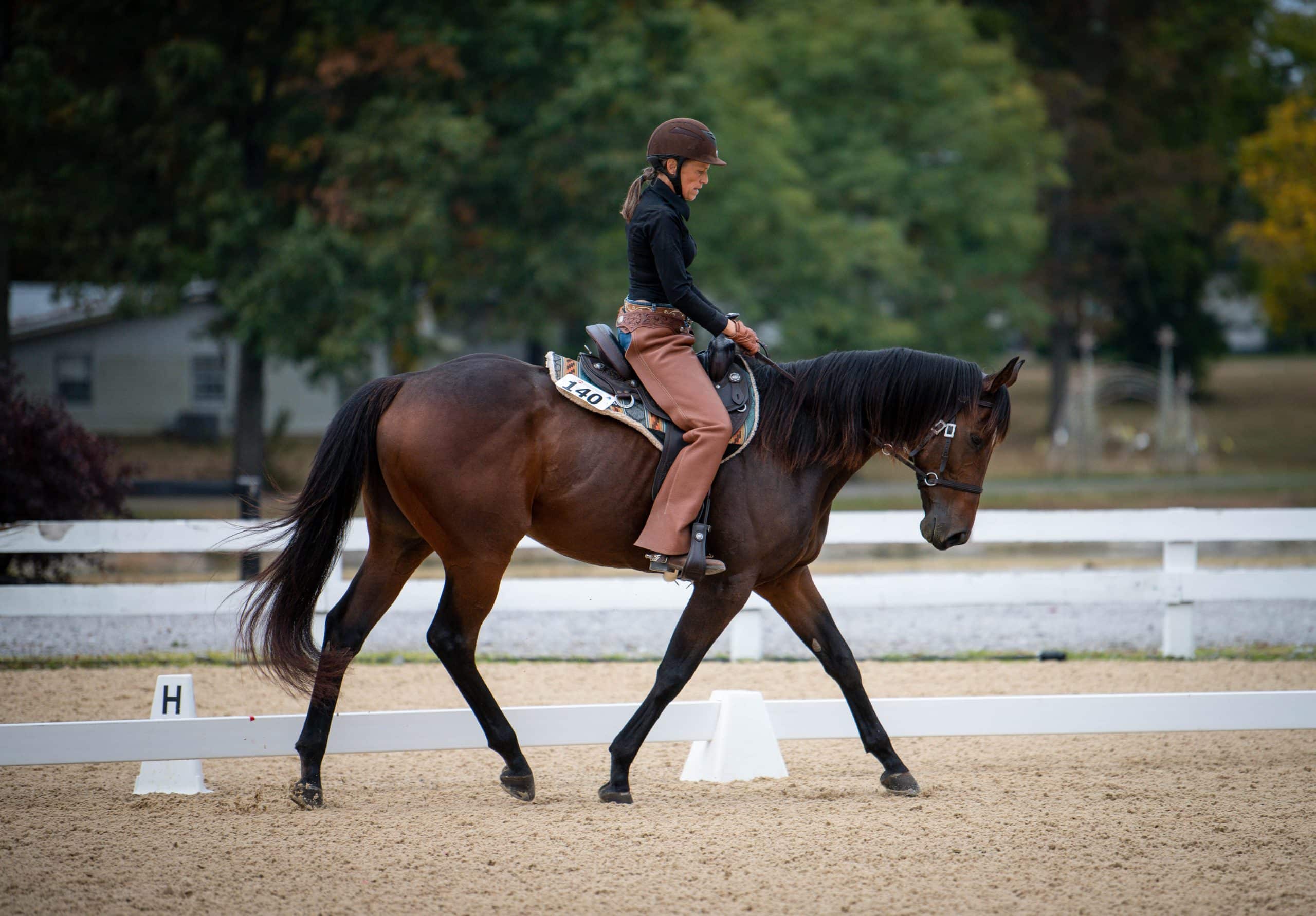 Initially looking for a resale project, Holly Zecchin, a professional from Metamora, MI, scrolled past Buckeye Warrior’s listing through New Vocations Racehorse Adoption Program when she was looking for horses; the gelding was rehabbing from a fractured tibia. Something drew her to the horse, however, and just a few days later, she picked him up, having never even seen a trot video. Whatever intuition guided Zecchin to Buckeye Warrior proved sound when the pair laid down a series of impressive tests in the Rolex Arena on Wednesday.

“He’s just a fabulous individual,” said Zecchin. “I can’t express how sweet and trainable and wonderful this horse is. He rises to every occasion — I’ve never had a horse like him. I’ve had wonderful horses but this guy tries so hard and never puts a foot wrong.” 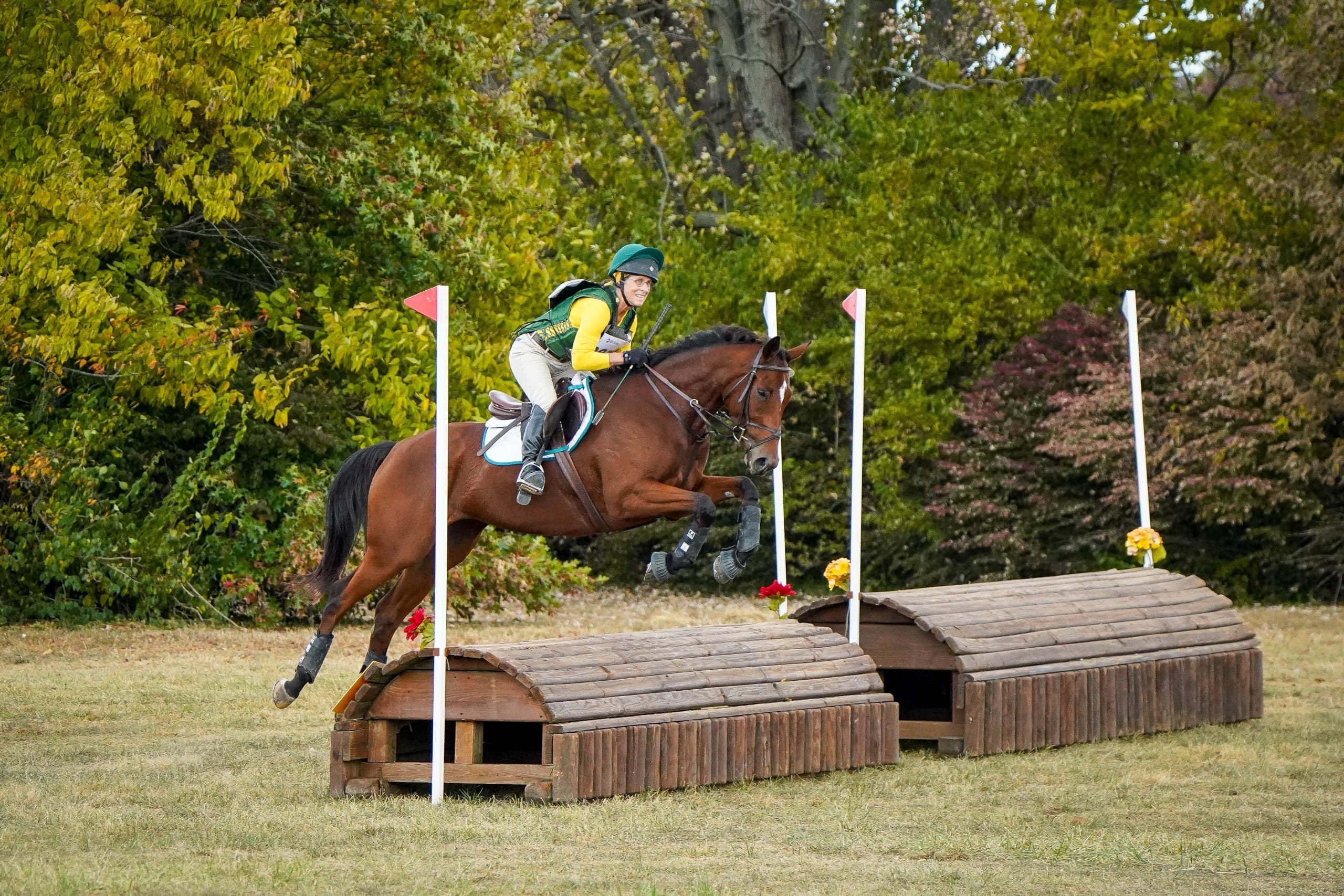 “Jean Walter is a wonderful lady and a very good horsewoman,” said Faherty Napravnik. “Sapphire Surprize is super smart and super scopey. She has just gotten better and better, and I’m just so proud of how she’s turned out. I had hip surgery this year, and I was out for a couple of months, so when I came back we got strong together. She’s a great horse to train — I can’t ask for more from a horse in training for just a few months.” 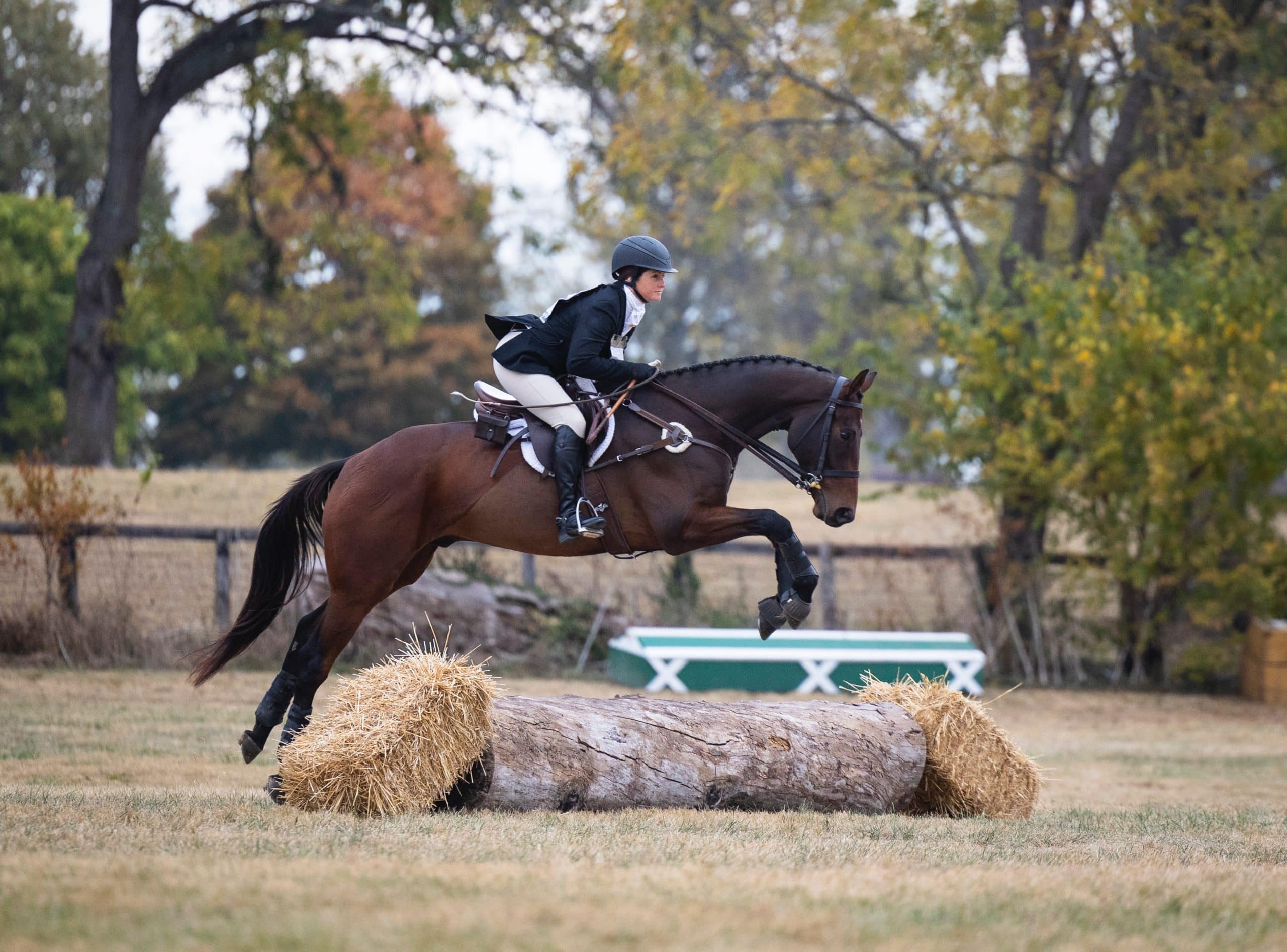 Jazz Napravnik and Lucian’s commanding lead to clinch the Field Hunter preliminary win belies the fact that it’s a miracle Lucian is here at all: one year ago, he was in the ICU at New Bolton Center fighting an intestinal infection, followed by a bout of laminitis. His owners, the Horneffers, were firmly in the horse’s corner, refusing to give up on him — “they knew how special he was,” said Napravnik. Rehabilitation took a long time, but his training for the Makeover started in earnest in May.

“It’s not only that he’s here with us,” Napravnik, a professional from Monkton, MD continued. “But that he’s here at the Makeover, and to win this discipline, is incredible. He absolutely deserves it. He’s a unicorn horse.” 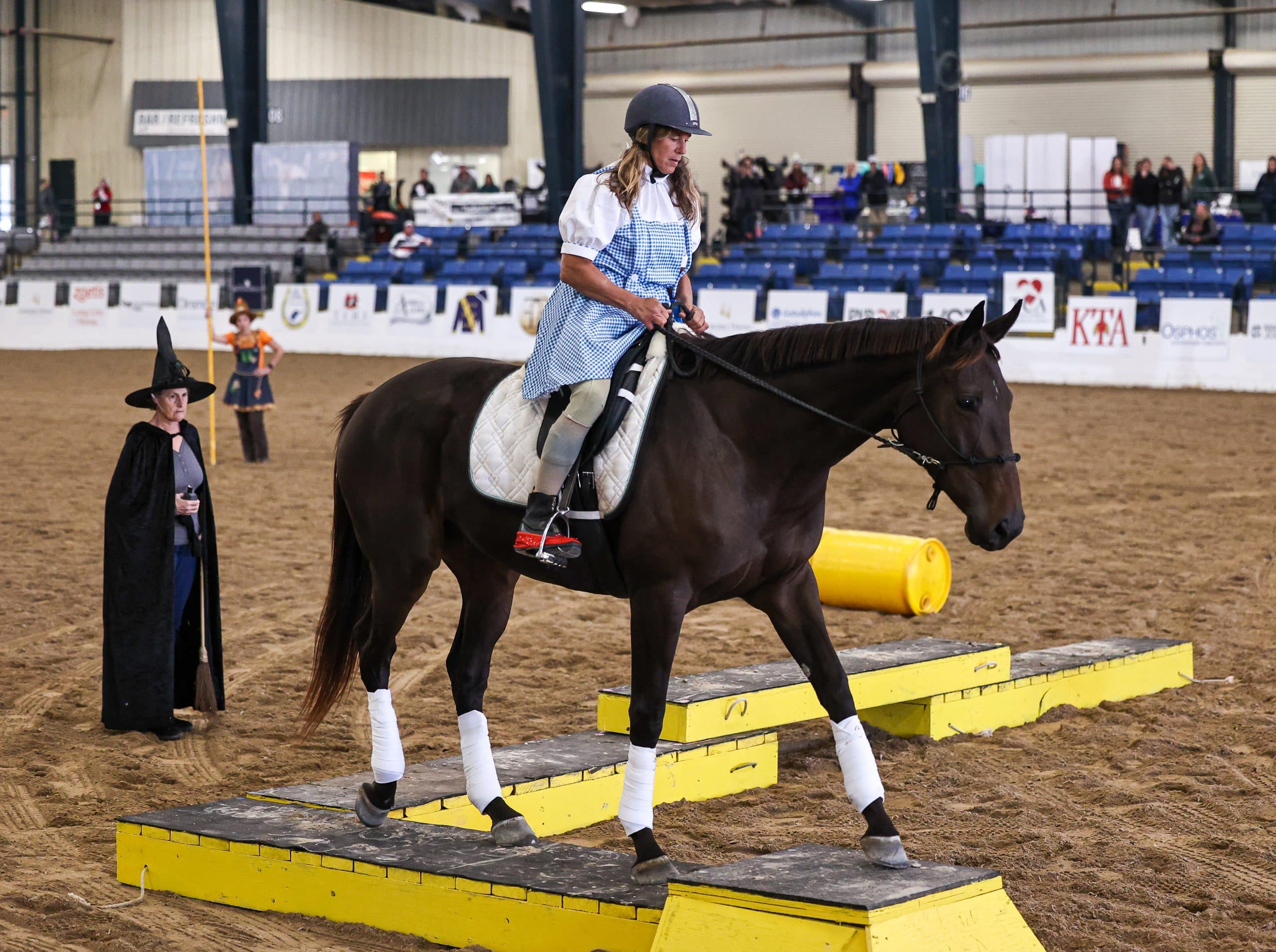 Performing a Wizard of Oz-themed routine, Monique Cameron, a professional from Hackett, AR, and Supreme Irene charmed both the audience and the judges to claim the preliminary win. 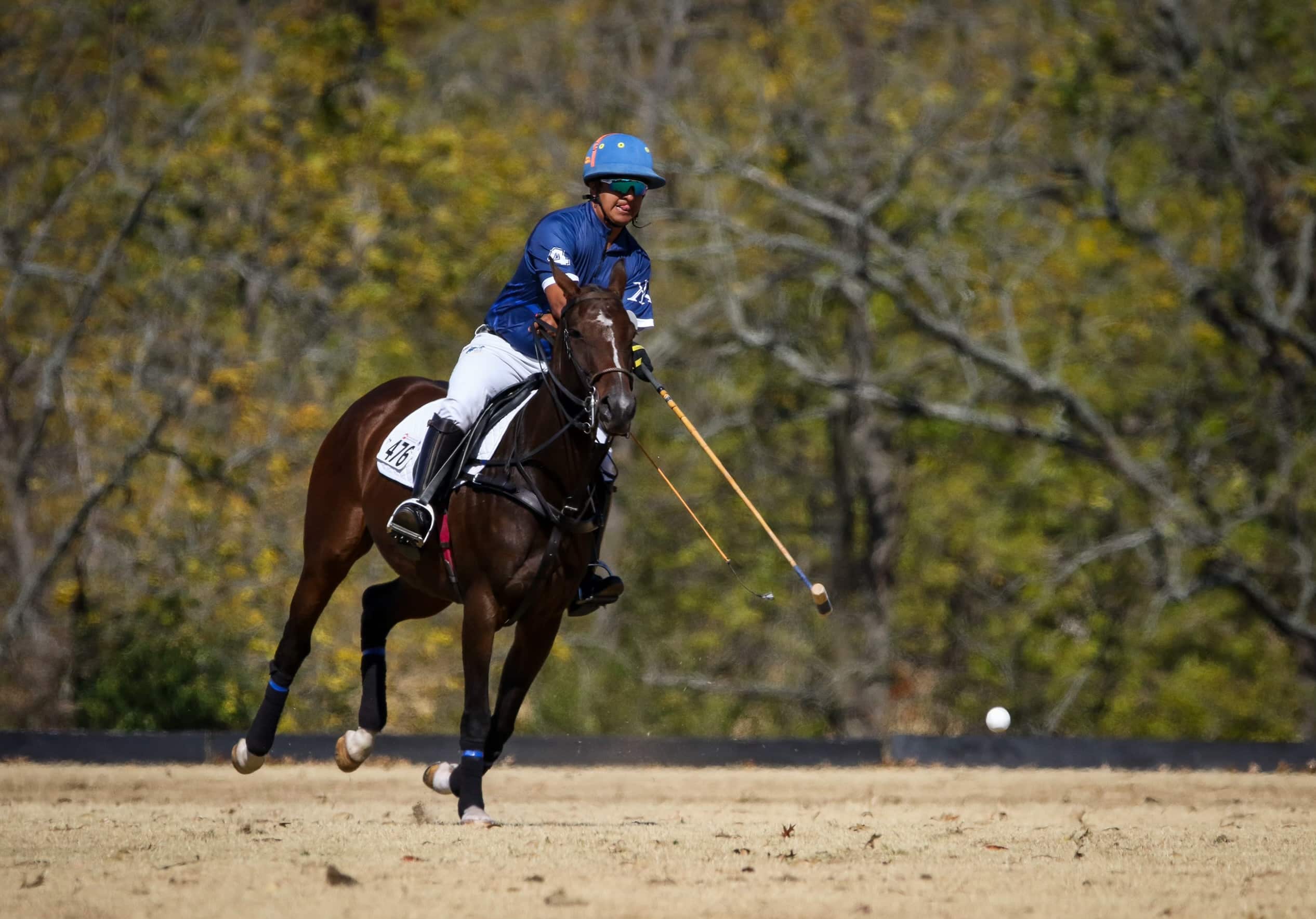 Courtney Asdourian, a professional from Baltimore, MD, started Yireh for the Thoroughbred Makeover early in the year and continued to develop the mare’s training until Asdourian’s pregnancy forced her to find a catch rider. She reached out to fellow polo trainer Esteban Matuz to take over the ride.

“The horse is very natural and has everything she needs to develop into a great polo horse,” said Matuz through an interpreter. “She has a great mind and moves fluidly. I’d like to thank Courtney for allowing me to show her.” 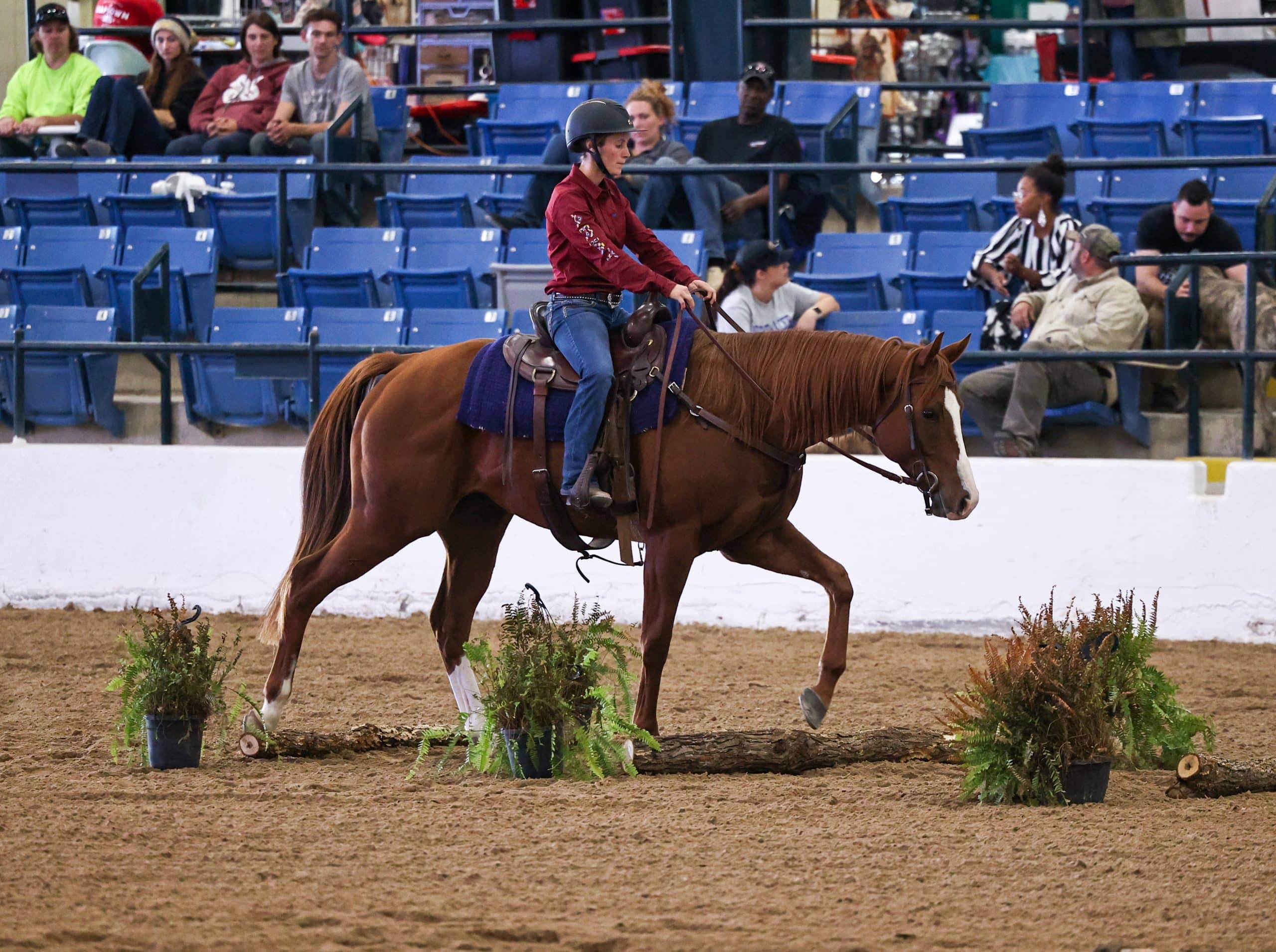 A lifelong sport horse rider who worked her way into the racing industry, Alice Beckman, a professional from Dry Ridge, KY, has the unique position of having started her Makeover mount when he was just embarking on his racing journey — and then piloting him to two of his wins as his jockey for his last seven starts. She and Dont Ask Kinmon are now embarking on Beckman’s first Thoroughbred Makeover and entered the Ranch Work as an opportunity to grow and learn; the pair also competed in Dressage.

“Honestly, I didn’t expect this at all,” said Beckman of the pair’s preliminary win in Ranch Work. “I’ve never ridden western before and it was a learning process for me and the horse, and I just wanted to have fun with it. I wanted to come and give him a good learning experience — this is more than I was expecting for my first Makeover!” 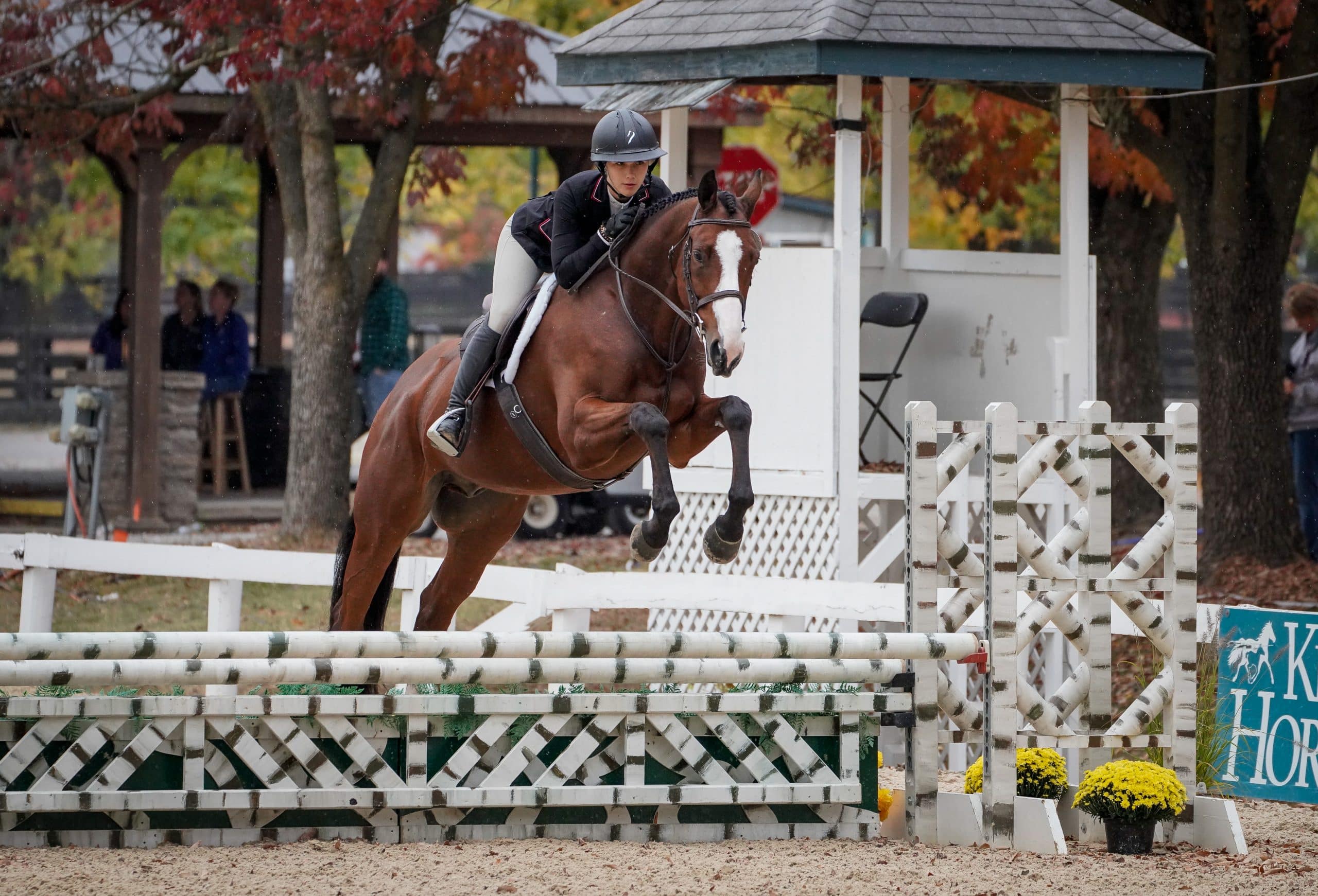 Amanda Gomez made her last trip to the Thoroughbred Makeover in 2017 when she was still a junior. Now returning as a young professional from Norco, CA, she laid down two beautiful trips in the Stonelea Ring with Racing Ace to take a commanding lead in the Show Hunter discipline in the very first division on Wednesday morning.

“I’ve had him for about eight months now,” said Gomez of Racing Ace, who last raced in February of this year. “When he came off the track, he was just special — so quiet and so easy. I knew from that moment from that first ride that he was going to be really, really nice. I’ve taken the time slowly to put a good foundation on him and he’s coming along so well. This is actually his first show ever — but he showed up and let everyone know what he’s made of!” 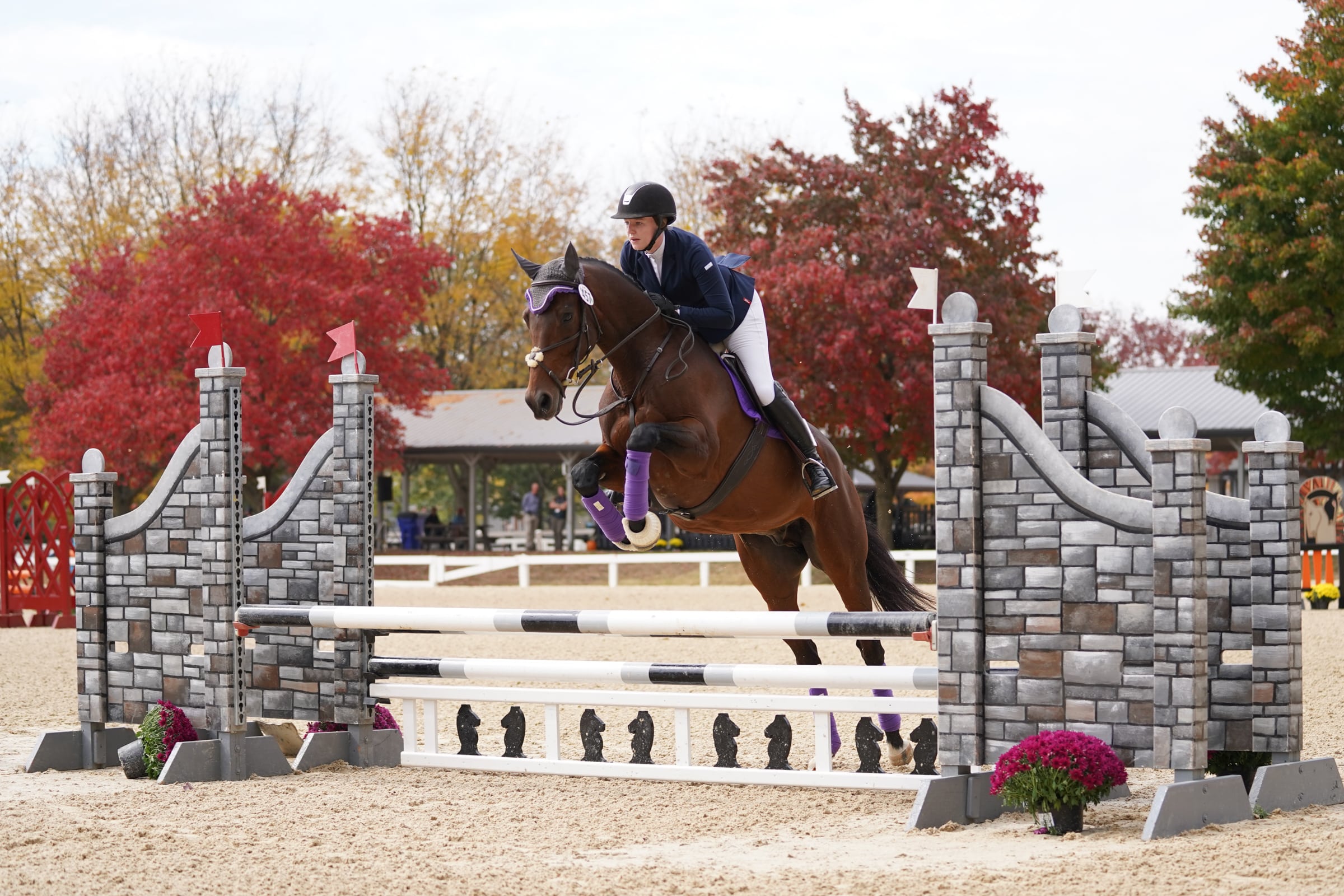 Adult amateur Alyssa Kelly of Eldersburg, Maryland is making the most of her trip to Kentucky with Union Charm: not only did the pair win the preliminary round in the Show Jumper, but they’re also entered in dressage in the Thoroughbred Incentive Program Central Region Dressage Championships later this week. That cross-training has been key to his success, said Kelly.

“It really helped for the format of this competition that we’ve done a lot of dressage for his flatwork,” said Kelly, referring to the portion of the Show Jumper discipline that tests each horse’s flatwork training. “He has a nice even canter and he’s super careful; he fixes my mistakes and helps me out! He’s always been game for just about anything we throw at him, whether it’s a hunter show or dressage or show jumpers. He has a good personality to go with the flow.” 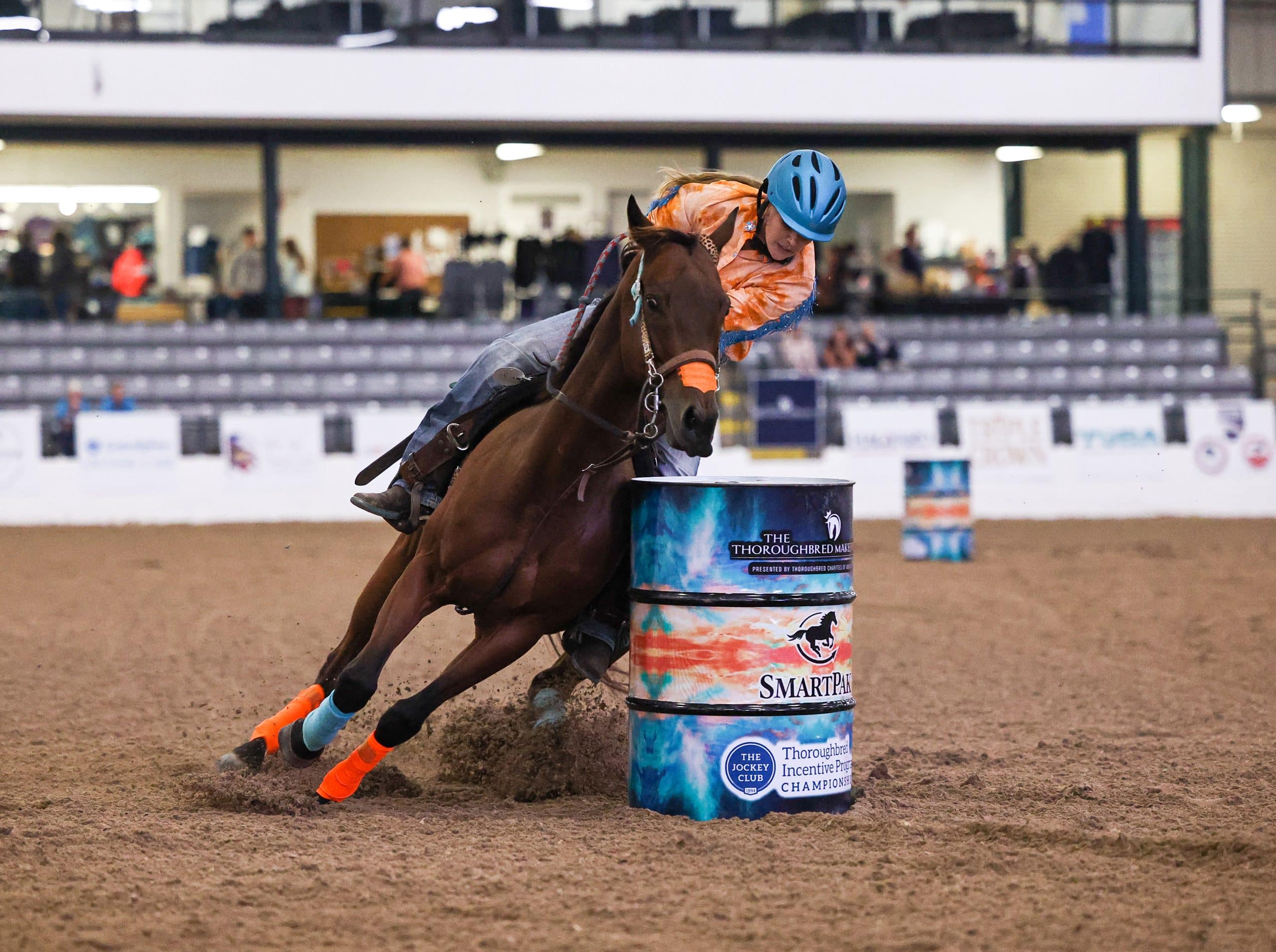 Liz Howell, a professional from Bell, Florida with her Whiskey Terms (Connecting Terms – My Doctor Knows, by My Friend Max), won the 1D average after running the fastest time on Wednesday and second fastest on Thursday. Whiskey Terms is a 2013 gelding with earnings of $6,100 and a race record of 13-0-2-1. He was bred in Louisiana by Joseph Dauphine and last raced for owner Shellie Duhon under trainer Benjamin Zeno. He is a 2019 Thoroughbred Makeover graduate.

“We’ve been working really hard for awhile now,” said Howell. “We were third overall in 2019 [at the Thoroughbred Makeover] and that was huge. Last year [at the inaugural T.I.P. Championships] he was in the 1D and third again, and I thought that was huge too. This yeah I knew he had a lot more experience and he could come here and win.”