Michelle Craig Is Finding The Bright Side By Going Bridleless 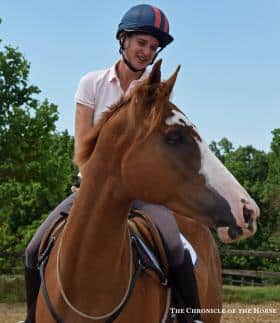 A bad trailering accident left Rory with a broken jaw, so Michelle Craig has started training him bridleless to reach new goals. Photo by Laura LemonWhile Michelle, a professional rider and horse trainer in Upperville, Va., had plenty of experience with off-the-track Thoroughbreds, this one, 5-year-old “Rory,” was special. Despite being little more than 90 days into training, he was easy and willing. He was levelheaded, rarely spooking, with an even, rhythmic canter. And even though he was in the early stages of his re-training, Michelle trusted him enough to carry her young son around in the leadline.

Michelle, Carter and Rory were 20 minutes into their drive when a U-Haul truck accelerated to make a turn and rammed into the rig, breaking the horse trailer off the hitch.

“It was one of the scariest moments of my life, watching this truck accelerate into me, knowing I couldn’t avoid being hit by him,” Michelle recounted on her blog.

The whole front of the trailer broke apart, coming detached from the truck.

“The people behind us said that Rory went straight forward and then to the right, into the ceiling,” said Michelle. “So he broke the chest bar, the head divider, and when we opened up the door, he was jammed up into the ceiling.”

Coupled with this horrifying scene was the sight of Rory bleeding profusely from his mouth. He’d broken his upper jaw, beginning straight through his front teeth and traveling up through his jaw before ending towards the left. Michelle had no choice but to unload him on the side of the road and try to get him to a veterinarian as fast as possible. Rory remained calm in spite of his gruesome injury, allowing many different people to hold him amidst the chaos.

When another trailer arrived to take him to the veterinarian, he loaded easily with no fear.

“He is very trusting,” said Michelle, as she explained that he has loaded onto every trailer since the accident willingly. “I don’t know if I would be as trusting.”

Michelle purchased Rory on Nov. 20, 2015, after her friend and Ohio race trainer Jen Ruberto sent her pictures and a video. It was Michelle’s 41st birthday. But instead of being a day filled with cake and celebration, she spent it in the hospital with Carter as he underwent yet another MRI. He was diagnosed with a tumor on his brain stem in May of 2015. Surgery isn’t an option, as it would leave him unable to walk or eat, and he’s too young for radiation treatment. So for the past year, Carter has received regular MRIs to monitor the tumor.

Completely trusting Ruberto, Michelle seized the opportunity to buy herself a birthday present.

“It was kind of like an impulsive decision, buying him sight unseen,” said Michelle. “It was solely because I needed an outlet, I guess.”

Rory was bred in Louisiana, racing five times under the name Youmightbearedneck. Renaming him WestWind’s Rorschach after the famous inkblot test that mimics his endearing facial markings, Michelle envisioned entering him in the Retired Racehorse Project Makeover and then reselling him.

She’d wanted to participate in the Makeover, which takes place in Lexington, Ky., in October, before she purchased Rory, but a major shoulder injury last year put that plan on hold. So she thought the 2016 Makeover would be a good goal. Prior to the accident, she’d been training Rory for the dressage and field hunter classes.

But Rory’s jaw fracture changed everything. On April 11, Dr. Sarah Dukti, DVM, DACVS, performed surgery at the Piedmont Equine Practice (Va.) to stabilize his mouth with wires. Like a teenager, Rory donned braces to reshape his jaw. He was prescribed stall rest and a specific diet with the hope that the wires could be removed around the end of June, if all continued correctly. And he wouldn’t be able to wear a bridle or bit until fall. 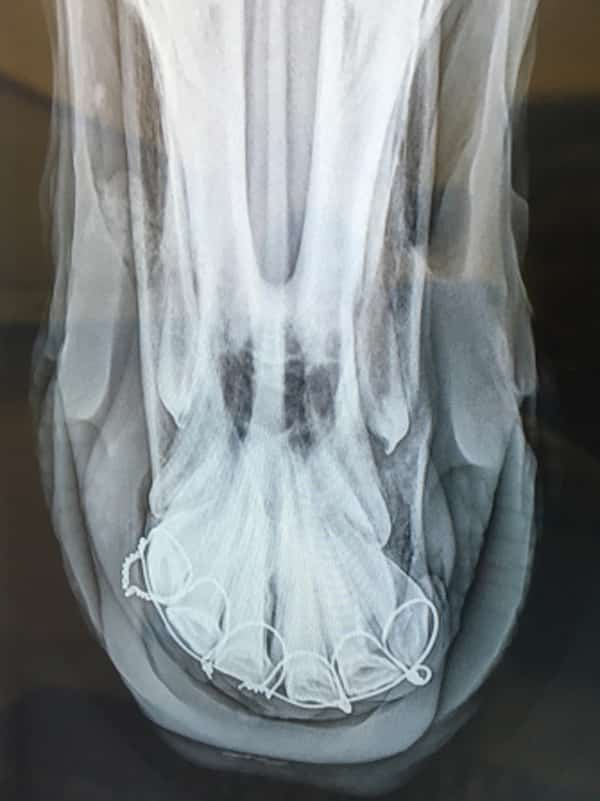 “I was really upset, you know, because I just really like this horse,” Michelle said. “And I was so looking forward to [the Makeover]. A lot of great clients were like, ‘You can have this horse,’ or ‘We’ll buy you this horse,’ or whatever. I was like, ‘I really only want to do it on Rory.’ ”

Although they’d only had a few months together, Michelle had witnessed this once nervous horse blossom into a gentle personality, willing and eager to please. He was green, sure, but he’d learned the basics quickly and seemed game for anything. And he was the special horse she’d bought on her birthday during a difficult, emotionally draining time.

As Michelle shared her sadness and frustration with Ruberto, her friend suggested riding him bridleless.

“I called our vet, Dr. Jen Jordan, and I said, ‘What do you think about this?’ ” Michelle said. “And she’s like, ‘Well I don’t know how that is going to go, but as long as nothing is in his mouth and nothing is touching the break.’ ”

A hackamore or a bitless bridle weren’t options since a noseband would put pressure on Rory’s injuries. Michelle had never trained a horse to go bridleless, and this was, “Nothing I would have done on my own.” But for Rory, she was willing to try.

Click here to continue reading the full article at ChronofHorse.com