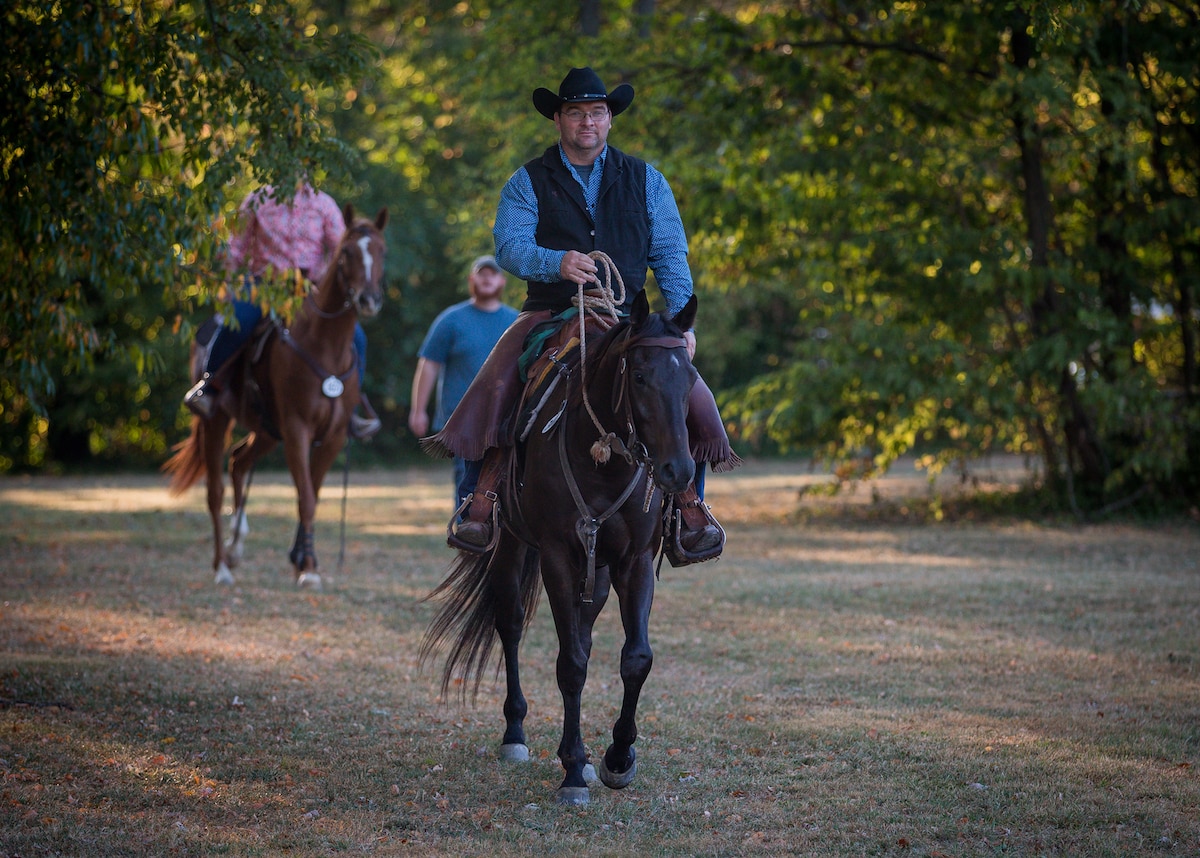 “I think trail riding is the best thing you can do,” says trainer Tim Brock, pictured on the trail course with Noble Apollo at the 2019 Thoroughbred Makeover. CanterClix

Thoroughbreds get exposed to a lot during their racing careers: crowds, noise, frequent travel, constant handling, hustle and bustle. Their exciting early lives, however, have been confined to tracks and backsides. Asked to face cattle, cross-country jumps and schooling rings, some might just have a meltdown.

With this in mind, a common practice among successful Makeover trainers has been getting their off-track Thoroughbreds out and about and exposed to as many new things in those critical first 10 months as possible. That way, when they arrive at the Kentucky Horse Park, in Lexington, come October, they can focus on showcasing their skills, rather than quieting an overfaced horse.

In this article we’ll explore outings you can take and exercises you can do with your OTTB — whether you’re Makeover-bound or just looking for more ways to develop your horse — with tips from two veteran trainers.

First and foremost, off-track Thoroughbreds need to understand that trailer rides no longer take them to the racetrack.

“Every time they go somewhere, they think they’re going to run,” says hunter/jumper trainer, judge and clinician Julie Winkel, who owns Maplewood Stables, in Reno, Nevada. “They need to go places where they can understand that’s not their job anymore, and they need to go as many places as possible.

These experiences help breed bravery, patience and trust in a horse that’s had but one job in life: to run.

“I think it’s huge for their confidence,” says Tim Brock, a natural horsemanship and Mustang and Thoroughbred Makeover trainer, who owns BC Stables and Training Center, in Fair Grove, Missouri. “If you don’t have a well-rounded horse, taking it to a show is a huge deal. Because it’s not just the show ring, it’s the atmosphere, it’s your energy going up and down — all of that causes those horses to tense up.”

Getting horses off the farm also sheds light on how they’re going to respond to those new atmospheres and energy swings before you ask them to compete. “Then you can build the relationship to help them through it,” Brock adds. 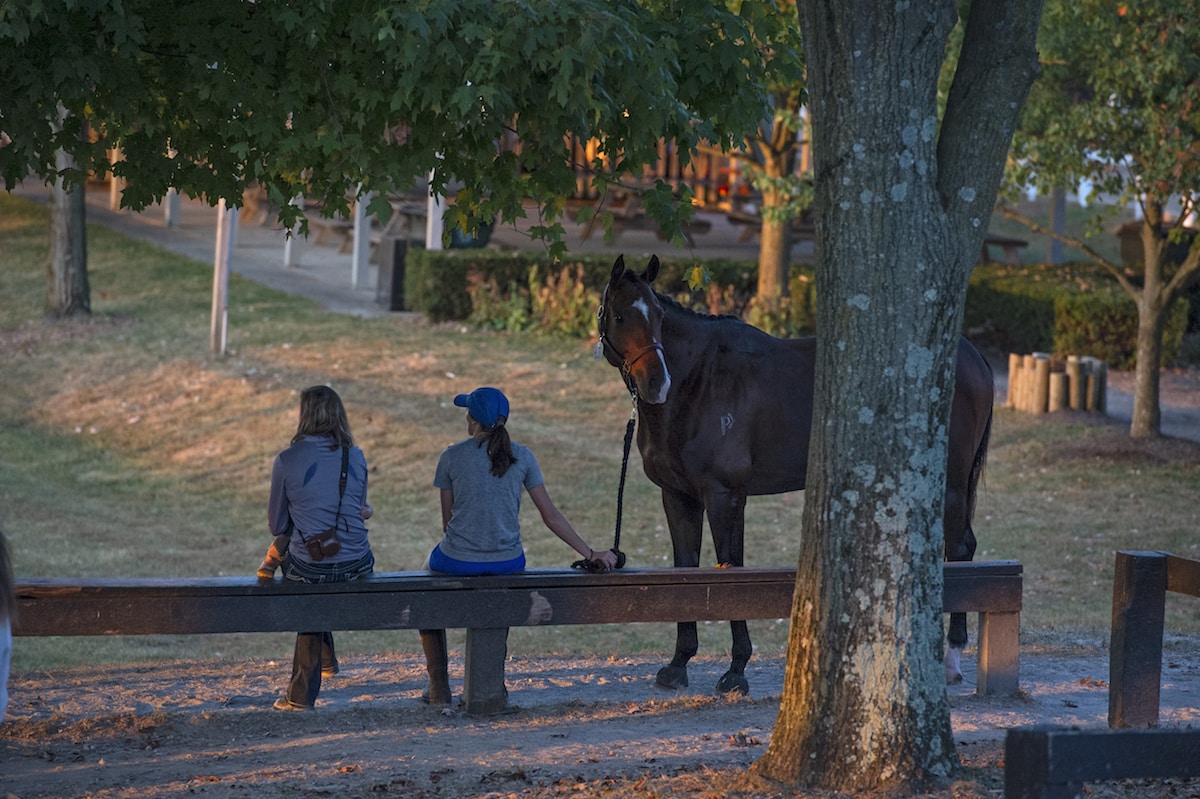 Haul in to a local horse show or another trainer’s barn, and just hand-walk and hang out with your horse while he takes everything in. Anne Litz photo

Off-farm outings don’t have to be overly involved or expensive to be productive.

“Go to a barn that just has more activity than what your horse is used to,” says Brock. His family takes their OTTBs (Brock, his wife, two daughters and an intern are all retraining horses for the 2020 Makeover), for instance, to a farm that hosts open rides for barrel racers. He says he ties them along the rail, where they can watch horses come and go and get accustomed to all the activity.

Similarly, says Winkel, “call a local trainer, and ask if you can haul in and ride in their ring or hang out during some of their lessons or events. That’s an inexpensive way to get exposure.”

If anyone in your area hosts unrated local shows, haul in for the day. Start by taking your OTTB on long hand-walks, asking more of him as he’s ready.

“One of the biggest things that I would recommend to everyone with young horses and OTTBs is to spend a lot of time understanding how important the walk is,” says Winkel. “Walk all over the show grounds, walk around the ring — just moving at a walk physically and mentally relaxes a horse and allows them to take in their surroundings.”

Then, she says, you can progress to trotting on a loose rein, then working on contact and eventually entering classes.

If you have access to properties or public land with trails, both Winkel and Brock laud the benefits of trail riding.

“I think people, especially if they’re getting ready for the show ring, are always thinking, ‘We need to go to the show ring,’ ” says Winkel. “But, you know, the older I get, the more I realize the value of taking a horse out and just exposing them to hills and open areas and being able to totally be a horse.”

“I think trail riding is the best thing you can do,” Brock says. “It’s a relax-and-go-forward kind of thing for these horses, and once they figure out there’s not a lot of training involved in it, they kind of enjoy that.”

Plus, horses get to see and experience things — from squirrels rustling in the bushes to running water crossings — that build their confidence.

Whether heading to an organized trail ride or hauling to a show or another farm, alternate between bringing your horse with a buddy and going it alone, “so that they learn to trust their owner and develop that confidence that their rider is going to be their leader,” says Winkel.

Other outings you might consider include hunter paces, Thoroughbred-only horse shows, ridden or groundwork clinics, trail challenges hosted by organizations such as Equine Trail Sports and open schooling opportunities at farms of any discipline. Search local equine association event pages or Facebook horse communities for inspiration. 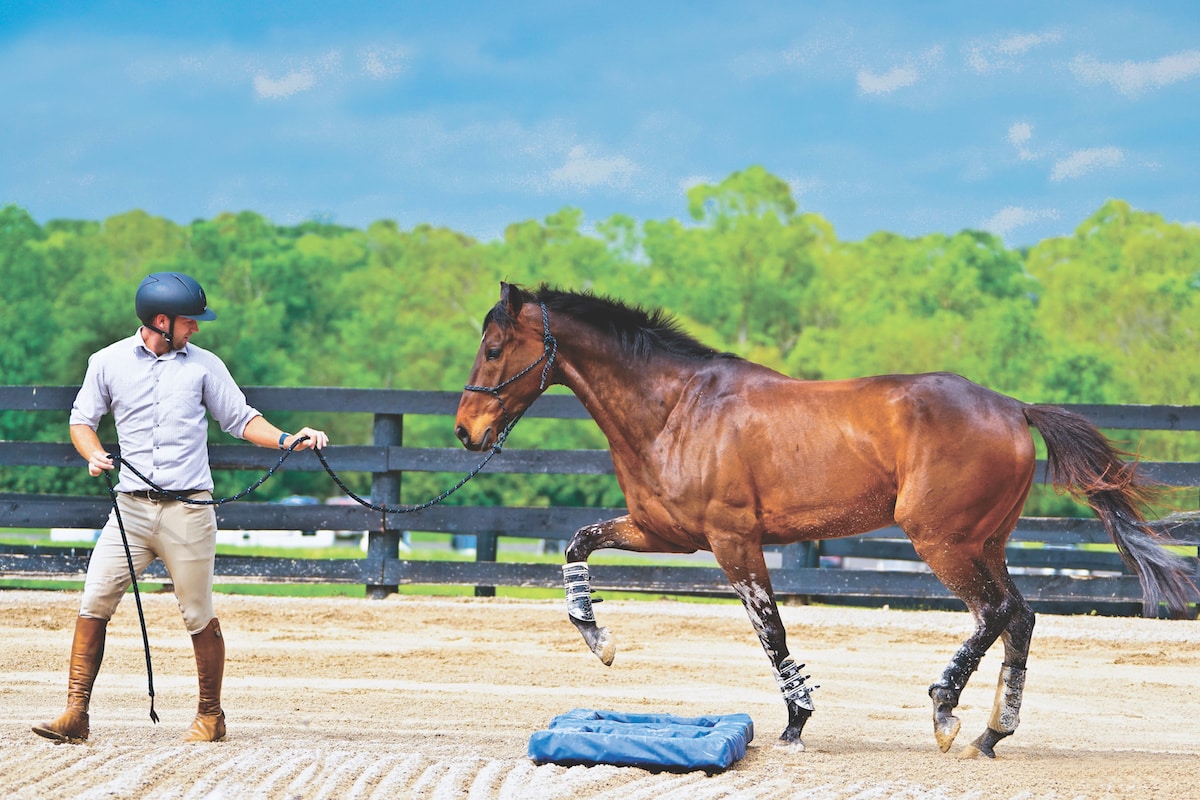 When you can’t get off the farm, bring things — tarps, tires, plywood — into the ring that your horse might not expect to see. Courtesy Kristen Helmsen

When you can’t get off the farm, you can still find ways to introduce your horse to new things. This is particularly worthwhile for OTTB owners who don’t have immediate access to a trailer or don’t live within easy driving distance of equine facilities and field trip venues.

“Move the jumps, move obstacles, so that each day things look different to your horse,” says Winkel. “Especially with a horse that’s really keen on their surroundings, move things and bring new stuff into the ring — tarps, tires, miscellaneous things that would be different from what they expected to see or saw the day before — and then don’t make a big deal of it.

“That’s the other thing,” she continues, “you never address it per se, you ignore it. You never threaten a horse about something new because it’s their instinct to run away from something suspicious. It’s more just reassuring a horse and not getting after him about it.”

Brock recommends introducing new things to these horses from the ground, as well. “We might put a ‘bridge’ down — a piece of plywood — and send them over it from the ground so they have to go over it instead of being led,” he says. “These horses have been led around most of the time, and they might cross something, but they won’t do it on their own. So I send them across a bridge, tarps, curtains — whatever you can do to make that horse have a bit of bravery in it.”

Whether working on the ground or in the saddle, remember to take your time. “Always have more than enough time to be able to spend on whatever that horse needs that day,” says Winkel. “It’s got to be on their time and never on your time.”

Listen to Your Horse

The key to any productive experience or outing is to expose without overfacing.

Brock recalls the first time he took his 2019 Makeover horse, Noble Apollo, to an open barrel ride and stood him by the ring. “For the first 35 minutes he just pranced and pranced and sweated and worried,” he says. “He thought he had to go with those other horses when they went by. He didn’t know it was OK just to be calm.”

Brock was patient and didn’t push Apollo, who eventually relaxed. “After that first day you could park him anywhere, and he wouldn’t move.”

When introducing new objects, concepts and places, trainers need to be able to recognize these indications that a horse is becoming stressed and others, such as being tense, on the muscle or distracted, and back off as needed. Learn to read body language and signs of anxiety.

“If they are nervous, tight in their back, tucked in their tail, head’s up — those are all body language signs that they’re not relaxed,” says Winkel. “So certainly you’re not going to push them more.”

Done right and with time, your horse should start to get “soft in the mind,” as Brock puts it, and understand that trips off the farm don’t have to be big deals.

“And when it gets there, the sky’s the limit with these horses,” he says. “They’re athletic, they’re intelligent, they try super hard.”

This article was originally published in the Spring 2020 issue of Off-Track Thoroughbred Magazine, the only publication dedicated to the Thoroughbred ex-racehorse in second careers. Want four information-packed issues a year delivered to your door or your favorite digital device? Subscribe now! 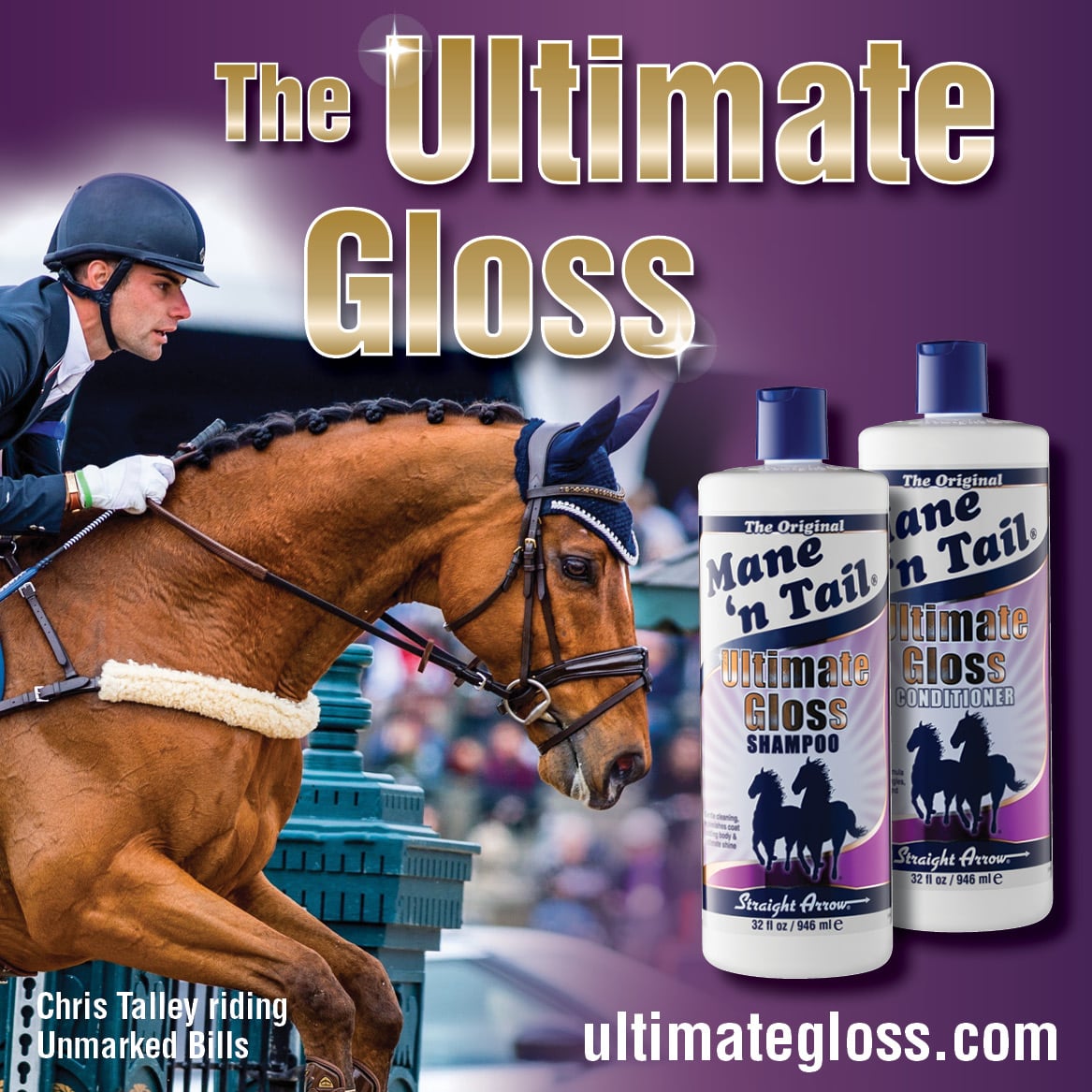